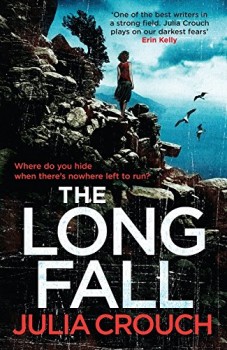 Kate seems to have it all – a perfect family, a lovely house and a successful career. But her world comes tumbling down when the past returns to haunt her.

It’s 1981 and Emma James has the world at her feet. She has a place secured at Cambridge, and is about to spend the summer travelling around Greece. But it’s a holiday that will change her life.

Cut to the present day, and Kate seemingly has it all – a wealthy husband who dotes on her, a lovely house, a vivacious daughter and a successful charity. But she’s fragile health-wise, and it doesn’t take much for her life to come tumbling down.

And it also doesn’t take too much to tie together the two parts of the book – Kate’s present day narrative and the travel diaries of Emma, who is in Greece looking for an adventure. But she turns out not to be too fussy about the company she keeps.

This is a book where you will need to hand your disbelief in at the door. If you want a quick and easy read, Julia Crouch manages to hook the reader’s attention, despite the fact none of the characters are that enticing. But once you start pulling at the loose ends, the plot is likely to unravel all over your feet. You may well spend most of the book wondering whether Kate is going to ever grow a backbone, or how on earth Emma got a place at Cambridge when she seems to lack even the most basic nous.

And that’s the problem which Crouch can’t resolve satisfactorily. I spent too much of the book questioning the women’s actions – particularly when present meets past. Even allowing for Kate’s mental fragility, she must be the most gullible woman to walk the earth.

The ending announces itself well in advance. I’m rotten at spotting clues, but even I guessed it. It’s all a tad too neat, and requires one character to backtrack rather abruptly. That might have been OK if the supporting cast had been given more depth to them and if I’d believed in the main character. In the end, The Long Fall is frustrating, as there’s the makings of a strong story there, but I just didn’t buy the characters or their motivations.