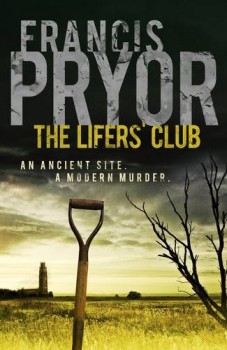 When archaeologist Alan Cadbury starts to look into the case of a so-called honour killing, he doesn’t expect to end up under threat, but someone wants to make sure he keeps his nose – and his trowel – out of things that don’t concern him.

When I saw that archaeologist and Time Team presenter Francis Pryor, had written a crime novel, my interest was certainly piqued, although I was more than a little daunted by the size of it; a small brick would be a good comparison. But I took it away with me on a couple of days’ break, and I was glad I did.

Alan Cadbury is a professional archaeologist, a ‘circuit digger’, going from one job to another on excavation sites around the country, so he’s pleased to have got a job close to home for once, in the midst of the Lincolnshire fens. The chance find of a scrap of newspaper relating to a so-called honour killing at nearby Blackfen catches his eye. He knows the name of the person convicted of the murder, even in the absence of a body – Ali Kabul, a young man Alan had met on a dig seven years ago.

Unsettled by the news, Alan decides to do some digging of a different sort, trying to discover the truth of what happened seven years ago. He contacts an old friend, DCI Richard Lane, a man he met on a forensic archaeology course some years ago and tries to obtain some information about Ali Kabul’s case. Alan also gets involved with The Lifers’ Club, a group of prisoners serving life sentences at nearby Blackfen Prison, hoping that he can entice Ali into contact with him through the young man’s interest in archaeology.

But Ali’s interest isn’t all that comes Alan’s way. When his house burns down, Alan is forced to consider whether trying to dig up the past in this particular way is sensible or whether he should just stick to his day job. Alan’s not very good at being sensible, though. He’s good with bones, but not great with people. He manages to put his foot in his mouth with remarkable regularity, especially with colleague and girlfriend Harriet, a woman who stands so little nonsense that it’s surprising she puts up with Alan at all!

The thing that shines through the most in The Lifers’ Club is, as you would expect from someone with Pryor’s background, his knowledge of archaeology and history. The only problem is that he’s determined to shoe-horn that knowledge it at every opportunity, which leads to some clunky dialogue when two characters explain things to each other, usually wholly unnecessarily, given they’re all working in the same field. But that aside, archaeology is interesting enough, at least to me, and almost certainly to many others, given Time Team’s enduring popularity, to carry a fair amount of exposition before it becomes terminally boring, and Pryor usually manages to stay just on the right side of that particular divide.

The ending probably owes more to the antics of MacGyver than it does to Tony Robinson & Co, and I did raise my eyebrows a few times when the book reached its climax. But despite the need to suspend some disbelief, The Lifers’ Club is a good read for anyone who still watches endless re-runs of Time Team (yes, Sharon Wheeler, I’m looking at you!) You’ll learn something along the way, even if it’s only that for an archaeologist, Alan has a remarkably cavalier attitude to the integrity of a crime scene! Oh, and for a historian, Pryor really shouldn’t have fallen into the WPC trap…