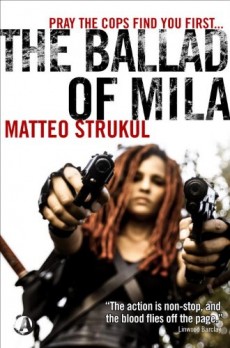 The Ballad of Mila

by Matteo Strukul (translated by Marco Piva-Dittrick and Allan Guthrie)

Two gangs are fighting for control of Venetia in north-east Italy. Mila Zago is a woman out for revenge, skilfully playing both sides off against each other as the body count mounts up around her.

The Ballad of Mila started life as an Italian graphic novel, was expanded to a full-length book and then translated into English. That could have been a recipe for disaster, but in the capable hands of Exhibit A, the slick, hard-hitting crime imprint of publisher Angry Robot, it turns into a rollercoaster, with some great action, neat turns of phrase and a spare, almost staccato delivery that hits as hard as badass main character Mila Zago can kick, and trust me, that’s pretty hard indeed.

Venetia in north east Italy is a town being fought over by two gangs, one Italian and one Chinese, both acting like angry dogs scrapping over a bone. Into this explosive mix, add Mila, a woman out for revenge on Italian crime boss Rossano Pagnan, the man whose minions were responsible for her father’s death and her gang-rape. With Mila, it’s very much a case of light the blue touch paper and stand well back before the sparks – and heads – start flying, in the latter case, quite literally.

The book’s origins are easy to guess. The scenes are as graphic in print as they would have been in pictures, and it’s surprisingly easy to forgive the way points of view have an unfortunate habit of bouncing around in some scenes like a ricocheting bullet. Technical failures like that are more than made up for by the classic pulp fiction feel of the book as a whole.

Despite her willingness to kill at the drop of a hat, there were times when Mila reminded me very strongly of my all-time favourite heroine, Modesty Blaise, another character who was born in a comic strip and later given another successful incarnation in a series of novels, the creation of the late, great Peter O’Donnell. Mila, like Modesty, is proficient in martial arts, can handle any number of weapons from katanas to handguns to submachine guns. You name it, Mila knows how to kill with it.

The Ballad of Mila is fast-paced and unashamedly violent, with descriptions that will make even the most hardened reader cringe at times, but if you have any liking for pulp fiction, then this is definitely the book for you. I galloped through it on a car journey through France, reading fast and occasionally from between my fingers, and now I’d really like to track down the original graphic novel to see how well the word pictures Strukul paints measure up to the original art work. And it appears that Mila, now with a new job as a bounty hunter, will – like Arnie – be back.