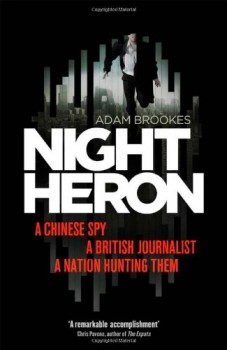 A British journalist is offered Chinese secret material by a source long thought to be moribund and is drawn into an intelligence operation, with dramatic consequences.

‘Peanut’, a long-defunct intelligence source for the British secret service, breaks out of a Chinese ‘labour reform’ camp where he has been incarcerated for 20 years. He extorts highly classified information from an old colleague with a view to negotiating a new life overseas, and approaches a British journalist working in Beijing, Philip Mangan, using his old emergency signal ‘night heron.’

Mangan is wary, but passes news of the contact to the intelligence services, who recognise a tremendous opportunity. As Peanut will only deal with Mangan, the journalist is pressured to act as courier. At first things go well, but Peanut’s source is nervous, and as the information gathered becomes widely disseminated in the intelligence community, the risks of exposure multiply.

This is a spy thriller of top quality, comparable to the work of Le Carre and other big names in the genre. The characters are well-drawn and placed in gripping circumstances right from the start. Peanut is on the run from a brutal institution, and his survival hangs by a thread, but is very focussed and not without skills. Mangan is a journalist prepared to take risks for a story and who wishes to do the right thing, but fails to foresee the extent of the jeopardy in which he and his colleagues may be placed.

Before too long we are introduced to the key players in the West involved in exploiting the product coming from Beijing, including secret service operatives with various levels of charm.  The case officer is Trish Patterson, and it is through her eyes that we see the work required to confirm the bona fides of the contact, to persuade her superiors to make the deal, and to monitor progress to production of results. Thereafter we share her anger as control passes out of her hands, and what was a clean operation becomes very dirty.

The book feels absolutely up-to-date, with modern technology a consistent point of reference. Mobile phones are ever-present, both for communication and for tracking. We find out the catastrophic damage that can be done to computer networks very fast and with very little. And the conclusion of the book brings a warning about the concentration of technological and other resources in private hands, which can bring dangers even exceeding those of which governments are capable.

The editors apparantly won a bidding war to secure this Night Heron, and are launching it with a major promotional campaign. Their confidence is doubtless bolstered by the air of authority it carries, which in turn reflects the long-time experience of author Adam Brooks as a BBC correspondent in China with some knowledge of the murky world of intelligence work. The power of the story is such that a chronologically straightforward narrative, passing between protagonists in a conventional manner, is entirely spellbinding.