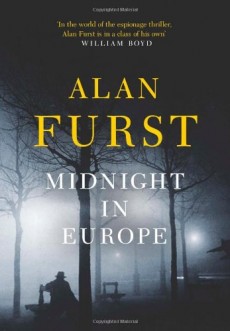 Cristian Ferrar, a Spanish émigré living in Paris and employed by a law firm on the Champs Elysées, is persuaded to become involved in running arms to the Spanish Republican forces in their fight against Franco.

Alan Furst has become known for a number of extremely popular novels set in or just prior to World War II – a period when Europe was fearful of the future that a ranting Hitler in Berlin might inflict on them. It is December 1937 in the second year of the Spanish Civil War. Cristian Ferrar, originally from Barcelona, is now based in Paris, working for Coudert Frères, a firm of lawyers situated in the Champs Elysées. His firm has very well to do clients, such as the Guggenheims, the Vanderbilts and the Gulbenkians. As a result he himself is very well connected and is able to exert an influence in certain – mainly political – quarters.

Thus he is approached by the Spanish Embassy to work for them on behalf of the Republican cause. He indicates that he will not be able to commit himself entirely to them since he has a large family to support, but promises that he will help whenever he can. It is through the Embassy that he becomes associated with a pro-Republican arms dealer named Max de Lyon.

The novel is mainly concerned with the efforts of Cristian and Max to secure and then to supply weapons to the Republican army which, following its heavy defeat at the battle of Teruel, is planning an assault on the River Ebro to halt the advance of Franco’s Nationalists. It is understood that should they fail the war will be lost. The problem with an historical novel of this kind is that the reader is very likely to be aware of the actual outcome and will know that this attack did fail and that Franco eventually defeated the Republicans.

What Alan Furst manages to do, however, is to persuade us to focus our attention on the efforts made by Cristian and Max to obtain and deliver the arms to their destination. He does this first by providing us with details of the planning necessary to acquire the arms. What he does not do – a fault frequently found in novels of this kind – is inflict on the reader all the research that clearly must have been carried out in the preparation for the plot. The description of the way in which the weapons are obtained in the first place is highly exciting, as is the subsequent action when things go wrong and they are dispatched to the wrong railway-shunting yard. Equally full of suspense is the visit to Germany on which Cristian and Max run into trouble with the Gestapo.

There is a good deal of movement in the novel – Paris, Berlin, Odessa – but the reader is always given sufficient information to be convinced that they are there. This is particularly true of those parts of the novel set in Paris – the elegance of the Champs Elysées, the cobbled streets and the sleazy nightclubs, the smoke-filled cafés ... Berlin also is graphically presented. Uniformed people are everywhere and parades are so common that even the zookeepers of Germany are on the march, doing their comical best to imitate the goose-stepping of the Wehrmacht.

The other talent that Furst possesses is to give life to even his most minor characters. Stavros, Max’s dangerous sidekick and his manic driver, Nestor, for example, are only briefly in the story but the author takes the trouble to give each of them an individual personality. Cristian’s wise old grandmother, Abuela, and his snobbish, social climbing mother are not essential to the plot at all but they have the effect of placing him in a believable context and great care is taken in their presentation.

This novel will keep the new reader engrossed to the very end. For those who have read other novels by Alan Furst the historical setting will be familiar but there is nothing to suggest that familiarity is likely to breed contempt.