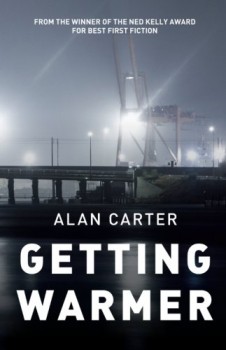 Senior detective Cato Kwong is back in the city after his ‘exile’. He finds himself in danger when he tries to deal with a missing girl, a manipulative killer, growing gang violence – and faces doubts over the motives and honesty of some of his colleagues.

Most of us think of Australia as a land of sunshine and sport. Through Senior Detective Philip ‘Cato’ Kwong, Pommie migrant Carter offers a third view of part of the land of the Green and Gold.

And it’s not pretty. Western Australia, a state experiencing a decades long minerals boom, offers all the worst excesses of the 19th century American west.

Its long-abandoned open-door immigration policy has produced a multi-cultural country – and attracted the worst of every nation. The rich get richer. The rest survive any way they can. Ethnic-based gang violence and drugs are rife. Police struggle against the handcuffs of political correctness and prejudice and the inevitable ‘short cuts’ are rife.

In the second of the series, Kwong is back in Fremantle after his up-country exile to the Stock Squad, returning to the city as things heat up both on the weather and crime fronts.

The book opens with a bizarre search for the body of a girl, allegedly killed by one of nastier and more manipulative psychos you’ll meet. When he is found dead on the floor of the prison kitchens – a sharpened toothbrush in his eye – it’s hard to see how anyone will miss him.

Two ‘white trash’ bikers are caught on CCTV beating him to a pulp, but deny his killing and their gang – on the verge of an all-out war with a Vietnamese ‘family’ – take the matter seriously.

Kwong’s nemesis from Prime Cut, poor-little-rich-girl detective Lara Sumich who will do anything to succeed, has her own problems with a body in a nightclub toilet which turns out to have been an undercover cop and there is no more than circumstantial evidence to link a Vietnamese crime lord to the killing.

As the parallel investigations proceed, Kwong becomes convinced they are linked – and that link is a corrupt officer or officers. In the frame are both his former partner and his current boss – and that linkage puts him and his son in deadly danger.

It’s impossible not to like Kwong. With his fallibility, his gallows humour and strongly developed sense of the bizarre, he’s a surprisingly real cop, friend and a separated father struggling to maintain connection with his son.

The narrative is tight, assured and as entertaining as the diverse storylines allow. Kwong’s ongoing battle with a neighbour’s noisy dog strikes a great balance between the personal and the investigation – and even this sideline is eventually woven into a clever and realistic plot.

Kwong’s no super-hero. He makes mistakes, he gets hurt both physically and mentally, but like a proper copper, just muddles on. He’s not afraid to play a lone hand – his working relationship with Sumich is as tricky as always – but constantly aware of his own vulnerability.

Getting Warmer is a tough, rough and occasionally downright brutal read – more Fosters’ XXXX than Neighbours – but with enough believability and humour to keep you riveted to the page.