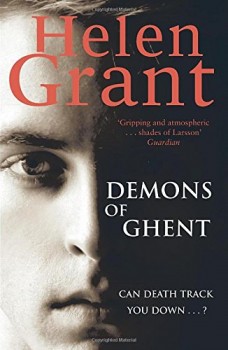 The Demons of Ghent

People are falling from the tops of buildings in Ghent. Did they fall or were they pushed? Veerle suspects the latter might be true, but she’s already in enough trouble at home and really shouldn’t get involved.

After the death of her mother, Veerle de Keyser has to move from her home in a Brussels suburb to the town of Ghent to live with her father and his pregnant girlfriend. She doesn’t want to be there, and it’s quickly plain that she’s not particularly welcome, either.

When a spate of unexplained deaths hits the town, with people falling to their deaths from the tops of buildings, Veerle finds herself caught up in a series of events that will prove as threatening as those in Silent Saturday, the first book in Helen Grant’s young adult trilogy. But Death isn’t stalking Veerle, not yet, at least. It isn’t long before she hears the story of the legendary Demons of Ghent, who stalk the rooftops, but she isn’t convinced, wondering instead if her own past hasn’t in some way caught up with her, because Veerle isn’t any stranger to death.

She’s also on the rebound from her boyfriend, Kris Verstraeten, who has been ignoring all her attempts to call him, and she very definitely doesn’t want to get involved with anyone else, least of all the superficially charming Bram. But against her better judgment, she ends up being caught up with his plan to spend the night inside the Gravensteen castle. And it’s during their illicit night there that Veerle witnesses a horrific killing, one they can’t even report for fear of giving themselves away.

Veerle is a complex protagonist, an 18-year-old on the verge of being able to live on her own, but still at times a teenager who’s struggling to deal with her feelings of guilt over the death of her over-anxious, dependant mother. Her father isn’t much help. She barely knows him, and he really doesn’t know how to deal with Veerle and her frequent unexplained absences from school, resorting to accompanying her there and waiting outside the gates for her. There’s something of the wicked stepmother trope about his girlfriend, who makes it quite plain to Veerle that she’s taking up space in the room that had been intended for her baby. She doesn’t show a lot of sympathy for the recently-bereaved Veerle, but Grant’s portrayal of her remains just on the right side of caricature.

It’s often said that conflict of some sort has to be at the heart of any book, and there’s certainly plenty of that here: Veerle’s domestic conflict with her new family, her emotional conflict between Kris and Bram, and the very real and dangerous conflict with the killer stalking the streets and rooftops of Ghent.

Helen Grant’s writing is fluid and descriptive, but she’d do well to dial back on the almost overwhelming number of similes she employs, sometimes two in a sentence. Her writing is strong enough not to need them. This is great storytelling, with a strong cast and a brisk pace. Atmosphere is skilfully built up and maintained, and Ghent’s past and present both come to life in a creepy tale of murder and obsession.