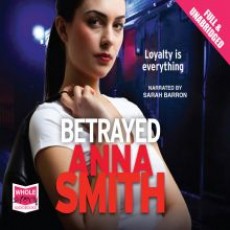 Investigative reporter Rosie Gilmour has a nose for news – and for trouble. She digs into the disappearance of a young barmaid, and promptly uncovers sectarian violence and drug deals.

Rosie has clearly put herself in danger in the past for the story, although we don’t get a lot of back story for her. She does, though, have both a tame Bosnian hitman and Spanish minder on call (as you do), plus a very long-suffering editor who cuts her a lot of slack.

Betrayed is a good, pacey story that doesn’t hang around. It’s particularly strong on the deep-lying bigotry of sectarianism in Glasgow. What looks like a run of the mill disappearance of a young woman uncovers corruption and violence all over the city – and further afield.

Where the story takes on depth, though, is when it gets inside the head of the young barmaid’s Ulster Volunteer Force boyfriend. He’s there because his father was a big name in the movement, but events of the book force him to examine his conscience on several occasions.

The violence isn’t overdone, but you’ll need a strong stomach towards the end. I was listening to the audiobook in the car and squawking periodically, as well as wishing I could have flicked past one particular scene.

The action comes to a head in Spain, amidst the fervour of a Rangers cup match. Maybe Rosie does get herself in deeper than your average reporter plausibly would, given she’s not undercover, but it’s certainly front page news as Smith pulls the threads together neatly.

And she resists the temptation to tie it all up with a neat bow, leaving a realistic cliffhanger for Rosie to face next time out.

Narrator Sarah Barron does a cracking job – she’s equally convincing as a Glasgow hard man as she is a young barmaid. And she does pretty well on the quick switches between Glaswegian and Belfast accents. You’ve got to like a narrator who can give the word ‘Christ’ three syllables!