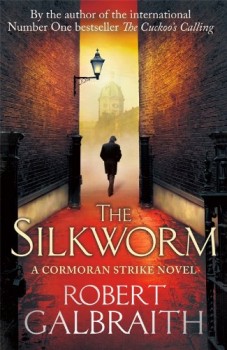 PI Cormoran Strike gets caught up in London’s literary community when he investigates the disappearance of an unpopular writer.

OK, so the whole universe knows that Robert Galbraith is really JK Rowling. And The Silkworm is a generous helping of Rowling doing what she does best – weaving a world and telling a good tale. This time she has the publishing world in her sights.

PI Cormoran Strike has graduated to the lofty heights of a flat above his office, rather than a campbed next to his desk. And he has just about enough dosh to pay his enthusiastic sidekick Robin after his success in finding the killer of a supermodel in The Cuckoo’s Calling.

This time out he’s approached by the really rather quaint Leonora Quine to find her missing husband Owen. He’s an infamous, rather than famous, author, with a track record of going AWOL in the hope of drumming up some publicity. This time, though, he proves much more elusive.
Cormoran plods around the literary scene of London – and you do wonder how many of the eccentric writers, agents and publishers are based on people Rowling has encountered during her meteoric career. You certainly wouldn’t want to be spending much time with any of them.

Bombyx Mori is the scientific name for the silkworm – and also the name of Quine’s controversial manuscript, which appears to pillory virtually everyone in literary circles. And there are some suitably gruesome punishments with historic backgrounds being meted out to people.

Galbraith/Rowling is planning a series with Cormoran, a disabled Afghanistan army veteran. And there are countless possibilities to turn it into a long-running favourite. We get to meet Al, Cormoran’s rather sweet brother, in this book, and I suspect there is much more to come from the dysfunctional family, as we have yet to encounter Cormoran’s pop star father. And I suspect the storyline with Cormoran’s former partner Charlotte will still lurk in the background.

I adore Robin, and in many ways she’s the character who grows the most in this book, as she starts to realise what she wants from her life – and the jury is still out on whether that includes her snotty accountant boyfriend. She hears some home truths from Cormoran, which bode well for the next book. And if Cormoran would see sense and go to the quack occasionally to get his much-abused prosthetic leg checked, then so much the better!