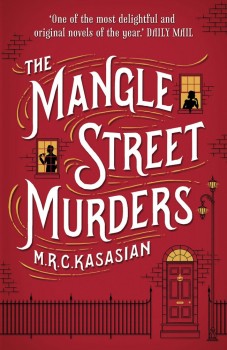 Noted ‘personal’ detective Sidney Grice begrudgingly accepts help from his ward March Middleton to solve a series of brutal knife murders which are terrifying the East End of Victorian London.

MRC Kasasian’s original and sparkling debut launches a new pairing of detectives on Victorian London – and one which the Suffolk-based writer has the sheer nerve to claim were the progenitors of Holmes and Watson!

In one of the final chapters, March Middleton, the female part of this unlikely duo and the daughter of an Indian army surgeon, has injured her foot and is attended by an unsuccessful retired army doctor with literary ambitions – one Conan Doyle by name!

Cheek it may be, but the arrival of the most superior ‘personal’ – never ‘private’ – sleuth Sidney Grice and his god-daughter March in the first of what is promised as a series under the cover title of The Gower Street Detective, promises as much of a treat as the master’s works.

Where they score is that Kasasian’s style combines both fresh and funny with some sharp plotting and at times quite harrowing descriptions of life in the London slums of the late 19th century as the pair bicker and sleuth their way to the solution to a series a brutal knife murders.

The lead characters are beautifully described and finely drawn. Grice is rude, snobbish, arrogant, a fastidious bachelor who believes women are there to do little more than serve his tea – without milk, naturally, at the optimum temperature. He makes the aesthetic Holmes appear a veritable social lion.

But as the story develops, it becomes clear that he has met his match in the equally and refreshingly unconventional Middleton – in many ways a 21st century, feisty, no-nonsense northern girl with a yet to be revealed, but intriguing back story – who, like Watson, is the narrator.

With its well-constructed plot packed with some vivid characters, witty dialogue and, at times, a surprising atmospheric depth, this book fairly races along. But the humour is never at the expense of the story – making this a real treat, a detective who is neither unbelievable nor too mind-numbingly serious.

It’s not often a reviewer can put down a book and say: ‘That was fun’. This is.