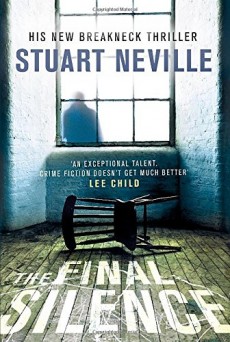 When Rea Carlisle forces open a locked door in the house of her dead uncle, she finds a scrapbook with a difference, not full of family photos, but of things like fingernails and hair, mementos of his victims.

I’ve never entirely understood the saying about exceptions proving the rule, but what I do know is that it’s a phrase that could have been coined for Stuart Neville’s main character. He’s called Jack. He’s got a tortured past. He’s a maverick currently on suspension for shooting another cop. I could go on… But DI Jack Lennon is certainly no stereotype and there’s absolutely nothing run-of-the-mill about Neville’s writing.

Lennon’s ex-girlfriend, Rea Carlisle, inherits a house from an uncle she didn’t even know. On the face of it, the house tells her absolutely nothing about Raymond Drew, but it does have a locked room, and Rea wants to know what’s inside. What she finds turns her stomach. A leather-bound scrapbook contains human fingernails, locks of hair, press cuttings and a chilling narrative from a man who was quite clearly a thoroughly unrepentant serial killer.

Her father wants her to destroy the book. He’s a politician with his eye on a seat in Stormont and doesn’t want to be tainted by the scandal that would inevitably erupt if the book’s contents are made known. Her mother – the sort of woman who flinches if Rea so much as uses a rude word – is equally keen to sweep matters under the carpet. But Rea wants the families of those who’ve died to get some much-needed closure.

The only person she can think of to approach is DI Jack Lennon a man she had a brief relationship with, until he brought it to an end. The problem is that Lennon, recovering from bullet-wounds obtained when he took down a corrupt cop, is sinking under the weight of his addiction to illicitly-obtained prescription painkillers and doesn’t have many friends left in the force. When Rea is murdered and the book disappears, Lennon is the most likely suspect, and tough DCI Serena Flanagan has no intention of letting him get away with murder.

Neville has an enviable ability to get under the skin of his characters and show what makes them tick. Lennon’s attempts to break free of the mess he’s in are painful to watch, and all he does is keep sliding down a particularly greasy pole. Flanagan, on the other hand, is a woman who seems wholly in control on the surface, but beneath it, she’s desperately trying to function in the face of crippling fear for her own health, and how she’s going to break the news that she has cancer to her husband and young child. All too often, competent female police officers are shoe-horned into the ‘ball-breaker’ stereotype, but there’s no way that description can be applied to Flanagan. Like all Neville’s characters, she’s immaculately well-drawn, and he’s able to let her show vulnerability without weakness.

Neville’s writing is stark and powerful, and above all, he knows how to tell a good story about people you’ll actually care about.