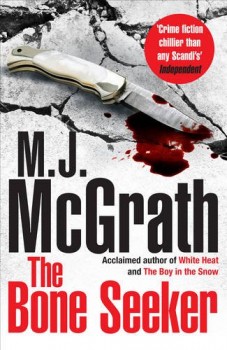 If you’ve had enough of twee villages or mean streets, run, do not walk, and pick up MJ McGrath’s The Bone Seeker. Turn the fire on or snuggle under a winter duvet, as the Arctic is chilly …

It’s summer on Ellesmere Island, home to 287 people. Not that that means the temperature is tropical there. And the relentless daylight is hard to cope with whether you’re an Inuit or from down south, as the locals say.

When Martha Salliaq, a young Inuit girl, is found dead in a contaminated lake, her teacher, Edie Kiglatuk asks her police officer friend to get involved. Derek Palliser has as much baggage as recovering alcoholic Edie does, and is most at home with his lemmings.

But they’re a tenacious pair, and start to wonder what’s going on when the military authorities at the local army base seem keen to pin the murder on two soldiers. And lawyer Sonia Gutierrez has uncovered a tranche of papers suggesting a cover-up of another nature has gone on in the past.

The Bone Seeker is one of the best books I’ve read this year. It’s slow-moving for sure, but every last detail about life in the Arctic is fascinating. This squeamish vegetarian wasn’t so sure about fried caribou ears or seal blubber for tea. And the thought of living 1500km from a town of any size, with a supply ship visiting annually, is hard to imagine for those of used to our creature comforts.

MJ McGrath was actually born in the UK, but has based the book on her travels to the Canadian High Arctic. She had me hooked by her portrayal of the culture and traditions of the Inuit, along with the locals’ fear of outsiders – fuelled by the presence of the army contingent.

Edie is a fascinating character, and I now want to go back and read the previous two books in the series to find out where she acquired her drink problem and troublesome relatives from. The latter reappear in this book, and play a vital part.

When the action picks up towards the end, it’s absolutely electric. McGrath has the enviable ability to create tension and menace in a seemingly understated style. I was reading the final tense scenes through my fingers – and was very glad the lights were on!