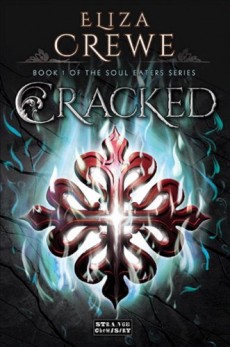 Meda’s on her own now her mum’s dead, but she still does her best to live up to the values her mum instilled in her. But it can be hard at times, especially the bit about not eating people’s souls.

Meda has always known she’s special, but not the way unicorns, rainbows and kittens are special. It’s more the way that someone who’s capable of ripping you apart and eating your soul is special

She’s on her own now her mum’s dead, but she still does her best to live up to the values her mum instilled in her. But it can be hard at times, especially the bit about not eating people’s souls. And when they really, really deserve to be eaten, it’s obviously more of a public service than murder, and she tells herself she’s only avenging the nasty stuff they did while they were alive, so the ghosts of their victims will leave her alone. That’s her story, anyway, and she’s sticking to it.

In Cracked, the first of a series featuring soul-eating half-demon, Meda, Eliza Crewe has provided a strong, sassy female lead, some great supporting characters and a story that never loses pace.

It comes as a bit of shock to Meda that the first people like her she meets, who might be able to provide some of the answers her mother never got around to giving her, seem to want to kill her. It comes as even more of shock when she falls in with a bunch of teenagers who say that they’re Crusaders, members of a secretive, elite organisation dedicated to keeping the world safe from demons, half-demons included.

Meda ends up with them at a scruffy biker trailer park: there’s tall, handsome Malachi, known to his friends as Chi; feisty, sarcastic Jo, who doesn’t want anyone’s pity or help, despite the fact that she lost a leg to the demons who killed her parents, and she certainly doesn’t want to be Meda’s friend; and Uriel – Uri – younger than the other two, but no less brave.

Cracked is more than just a young adult urban fantasy novel. It’s a story of friendship, loyalty and a fight against almost impossible odds. It’s also fast, funny and, at times almost heart-breakingly sad. Eliza Crewe avoids the usual trope and stays clear of any romantic entanglement between Meda and Chi. Instead, it’s left to Meda to try to pick up the pieces of the obvious attraction between Chi and Jo, even though both of them seem determined to avoid going in that direction again after a nasty break-up. At the same time, Meda has to avoid the demons that are hunting her and find out the truth about herself.

Meda’s relationship with Jo is one of the book’s strongest threads. They spar with all the ferocity of two wildcats in a sack, but out of their spats comes grudging respect, an uneasy alliance and then reluctant friendship.

Strange Chemisty, the young adult imprint of Angry Robot, whose adult crime arm, Exhibit A, has brought out some top-quality crime and thrillers, is a publisher to watch.