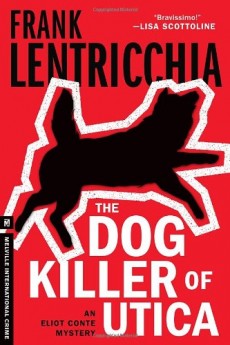 The Dog Killer of Utica

Eliot Conte’s dubious PI past comes back to haunt him after a series of violent assaults on close personal friends, and their dogs.

Eliot Conte is a native of Utica, New York, and in his mid-60s retired from a career as a PI to teach classes on Herman Melville. A life of American literature, opera, gardening with his neighbour and relaxing with his partner policewoman Catherine Cruz should make for peace and quiet, although Eliot still has difficulty with anger management.

His calm is, however, shattered by a series of violent events. Robert Rintrona, an ex-partner, is shot on the driveway to his home, and his life hangs in the balance. Still reeling from the news, Eliot is asked to help Mirko, one of his students of Muslim parentage who is being accused of planning a terrorist atrocity. Then Robert’s dog is shot deliberately from a car when being taken for a walk by Robert’s wife. As the number of incidents continues to escalate, it occurs to Eliot that the common factor is that the victims are all his friends.

This book is very American in style, told in the present tense, with plenty of guns and tough talk. The hero is raised in Utica, the son of a political fixer, and the hints about his past work as a PI suggest a robust approach to justice. In fact Eliot’s initial suspicions about responsibility for the shooting of Rintrona land on Antonio Robinson, Utica’s police chief, since Rintrona and Eliot are complicit with him in a criminal act which would mean his downfall if exposed. Organised crime played a part in Eliot’s life too at some stage.

Eliot’s enthusiasms include attendance at a personal training studio - POWER UP! - where his trainer and friend Kyle puts him through a routine which sounds life-threatening for someone in their mid-20s, never mind a 60-year-old. It may, however, be the only way Eliot can free himself of his aggression.  Partly this anger is said to relate to his guilt about losing two daughters in an acrimonious divorce, to see them killed later by his ex-wife’s new partner. Whatever, it is an aspect of his character which is difficult to overlook, and not one with which readers will necessarily have a great deal of sympathy, but it does provide some sort of explanation for the energy Eliot displays.

The Dog Killer of Utica – the second to feature Eliot – may hold particular appeal to those who like Chandler and Spillane, who have a dark sense of humour and a liking for the tough guy school of American fiction.