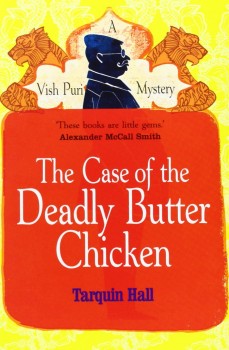 The Case of the Deadly Butter Chicken

When the father of a top Pakistani cricketer is poisoned at a post-match dinner in Delhi, the clues appear to point Most Private Investigator Vish Puri towards an international illegal betting syndicate, but is there a more personal motive behind the killing?

Most Private Investigator Vish Puri is as passionate about cricket as most Indians, so when Faheem Khan, the father of Pakistani bowler Kamran Khan, dies apparently poisoned, at a post-match dinner at a top Delhi hotel, Puri is keen to get involved in the investigation, but there is one problem: he doesn’t have a client and his business cannot afford for him to spend large amounts on the investigation without one. Then he is contacted by an old acquaintance, former Scotland Yard Deputy Commissioner James Scott, now working for an organisation called Clean Up Cricket, dedicated to stopping match fixing by illegal gambling syndicates.

Now Puri has a client, he can proceed with the investigation, which takes him through the dinner guests (politicians, captains of industry, Bollywood stars) into the dangerous world of illegal gambling and the, to him, even more dangerous world of a visit to Pakistan. Unknown to Puri, however, his mummy-ji is also investigating the case for her own reasons and it is only with her help that he can identify the murderer, solve the case and name the bookmakers in the gambling syndicates.

This book is written with a wry sense of humour and a light touch. Puri’s other ongoing case concerns the theft of moustaches from their sleeping owners, and throughout he is concerned both with his love for the tastiest food and pressure from his wife and his doctor to lose weight. The author perfectly captures the cadences of Anglo-Indian English and the glossary of Indian terms at the back of the book is invaluable.

Beyond the humour, however, the book deals with some serious issues. The 1947 Partition of India and Pakistan created millions of refugees travelling in both directions, including Puri’s parents and created the conditions for mass slaughters of the inhabitants. Girls and women unable to escape the fighting were abducted by both sides, many never to be heard from again, and numerous atrocities were carried out.  Puri’s fear and hatred of Pakistan stems directly from those events. The book also describes the divide between extreme luxury and abject poverty in Delhi and the lengths a poor man can be driven to in order to keep a job.

This is the third in the Vish Puri series of books and I eagerly await the fourth.