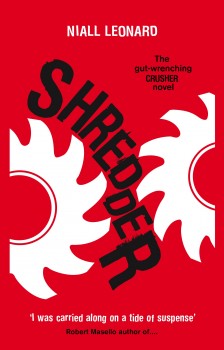 Finn McGuire is caught in the middle of a gang war that’s getting nastier by the minute and is in danger from both sides.

Finn McGuire is back. Shredder is the third book in a trilogy that started with Crusher, and was followed by Incinerator. The title of the first in the series was inspired by Finn’s nickname from the boxing ring, but the other two reflect ways in which his enemies have tried to kill him, or in this case, have threatened to kill him.

Incinerator ended with Finn being badly beaten by a bunch of heavies controlled by the young gang boss only known as the Turk. Finn’s been told to deliver a message to rival underworld boss, Joseph ‘the Guvnor’ McGovern – think the Krays and you won’t be far off the mark – telling him that the Turk wants a meeting. Finn has little choice other than to do as he’s told, as the Turk has made it quite plain what the consequences will be for him if he refuses, both for him and his former girlfriend, Zoe.

In Shredder, Finn’s story plays out against a backdrop of seemingly random terrorist attacks in a London as tense and on edge as it was during the recent riots. Finn inhabits a brutal world where the police provide scant protection, as his girlfriend Zoe finds out to her cost when the police leave her to fend for herself, despite the threat to her life. To save her, Finn quite literally has to light the blue touchpaper and then stand well back. Only standing back has never been Finn’s forte. Nor has keeping out of trouble.

This is a young adult novel that stands comparison with the best the adult field has to offer. There’s no sugar-coating of anything or pandering to any delicate sensibilities. Finn fights, swears, has sex and survives. He might be a dyslexic teenager with sod-all education, but he’s very, very good at surviving, even when he’s up against a gang war of ever-escalating brutality, where no one and nothing is sacred.

The Turk is a relentless enemy, and he even has the Guvnor on the run. The fact that all Finn wants is to be left alone cuts no ice with either side. Shredder builds relentlessly to a shocking and brutal climax, leaving a trail of destruction in its wake like the runaway tanker Finn ends up nicking at one point. I have absolutely no idea if we’ll see more of Finn in the future but I hope we do. Leonard’s writing is crisp, perfectly-pitched and always believable.

As a trilogy the books work very well, though each one can easily be read as a standalone. So if you don’t already know Finn, don’t let that stop you.