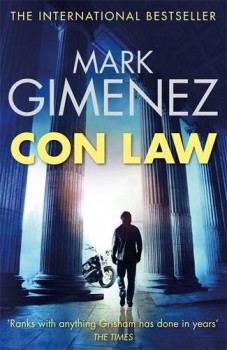 John Bookman is a professor of Constitutional Law at the University of Austin in Texas, has a book topping the bestseller lists and is well known for his regular demolition of senators on talk shows. He is also tall, dark and handsome, a skilled Taekwondo practitioner, and rides a vintage Harley.

‘Book’ is accustomed to receiving requests for help through the mail, but is particularly intrigued by a letter from a former intern, Nathan Jones. Jones works for oilman Billy Bob Barnett, and claims to have proof that his boss is contaminating the aquifer with pollutants from his fracking operations. Book pauses only as long as it takes to persuade his new intern Nadine onto the back of the bike, and sets off for Marfa, West Texas, in a one-man campaign for justice.

Book is so absurdly cool in every conceivable dimension - did I mention the Comanche heritage and the long hair? – that it is difficult to take this book seriously. The other characters are also pretty close to ‘stock’: the wise old sheriff who addresses people as ‘podna’, the intern who recognises the names of no-one born prior to her date of birth and is fixated on food, and Billy Bob himself, the epitome of the crass oilman. The style is light and amusing, however, and providing you are not over-picky about grammar, moderately entertaining.

Within the story, however, are several sections dealing with real issues and these are informative as well as interesting. Early on, Book leads his students in a discussion of US Supreme Court decisions relating to abortion and Obamacare, and startling facts are revealed about the business of teaching law. Later we are presented with Marfa, an isolated town with a small conservative-thinking populace suddenly invaded by a sophisticated urban artist set, something of a case-study of the conflicts likely to arise in such circumstances.

Particularly fascinating is the lengthy exposition of fracking: the technical aspects of the exploitation of shale gas, the benefits and dangers, and the size of the industry in the US. Few people will be aware, for example, that at the request of ex-vice president Dick Cheney, Congress made fracking the sole exemption to EPA rules restricting the chemicals you can pump into US soil.

The aspects mentioned above make Mark Gimenez distinctly different from other legal thriller writers such as John Grisham or Scott Turow where the protagonists are more believable, with digressions into law and fact only where of direct relevance to the plot. Gimenez obviously enjoys displaying his knowledge and Con Law is none the worse for it, but the planned series featuring Book will probably be better received if the admittedly engaging chunks of data are better integrated.