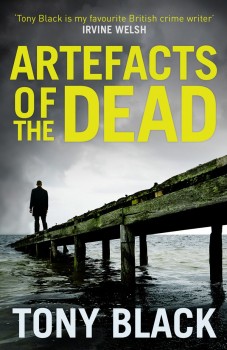 Artefacts of the Dead

Critically injured DI Bob Valentine is recalled from convalescence to investigate two horrifying murders. His investigations are hampered by an anxious by-the-book divisional commander and a series of ‘visions’ that leave him doubting his own sanity.

If there were ever to be a school for readers of crime fiction, Tony Black’s latest book should be the basic primer to teach them how real policemen act and react, think, behave and how their often pressurised job affects both the detectives and their families. And Black – writer of the addictive Gus Dury series, as well as the Doug Michie and DI Breenan books – enhances its authenticity with some wonderful backgrounding.

His Ayr is not the place I knew from racecourse visits. Ridden with drugs and mindless violence it is a town in terminal decline since the closure of the pits, a bleak and inhospitable place in an area of huge contrasts and a country in danger of being slowly strangled by its largely self-invented and self-justifying history.

DI Bob Valentine is an old-fashioned copper – a hunter who will pursue his target no matter how cold and faint the trail and who is prepared to take risks, some of which could cost him his career.

He is recalled from convalescence after a near-fatal stabbing, and must cope with not only his own fragile mental state – a textbook case of PTSD – but also a divisional commander who exemplifies everything wrong with policing in the last 20 years, a rapidly deteriorating family life and two incredibly brutal murders, soon followed by a third killing of a young prostitute.

A wealthy banker and a known paedophile are horribly impaled and left on public display. What, if any, is the link between them? Black’s dark, but incredibly realistic procedural descriptions, plus a touch of the supernatural – Valentine begins to suffer from both nightmares and daytime ‘fits’ which some detectives would call ‘gut feeling’, ‘conviction’ or the more educated ‘precognition’ – takes him to a point where he begins to doubt his own sanity and considers putting in his ticket.

But above all Valentine is a fighter – and his story treads the fine line between dramatic licence and realism with a sure-footedness close to perfection with often unrelenting violence finessed by surprising emotion and compassion so that it never topples into total black just for the sake of noir.

This delicate balancing act is aided by his minor characters – Valentine’s tough ex-miner father, his long-suffering wife – one of the best portrayals of a police marriage I’ve read – his daughters and the members of his investigative team. All, even a genuinely low-life pimp and an ambitious and unscrupulous journalist, leap off the page with a startling reality that adds to the overall effect of this beautifully constructed story.

Black spares no one in what is at times a quite excoriating tale. Scots, in particular, may find his judgements on the brutal side of harsh, but they all contribute to an outstanding crime story. If there is a weakness, I found the killer easy to identify by process of simple elimination, but that should not detract from what is a convincing, pacey and superbly told tale.