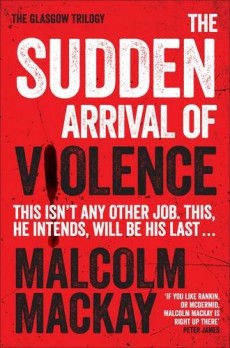 The Sudden Arrival of Violence

As the bosses of rival Glasgow gangs manoeuvre for control, killer Calum MacLean has had enough. He seizes his chance to quit, but cannot anticipate the effect this decision will have.

The conclusion to Malcolm Mackay’s Glasgow gangland trilogy returns to the depths of the city’s underworld – a place of relentless violence, dark motives and darker alliances – with all the brilliance of the preceding two volumes. This can be read as a stand-alone and it makes perfect sense, but to discover the full power you should really start with The Necessary Death Of Lewis Winter and progress through How A Gunman Says Goodbye because the story and characters run through towards this explosive climax.

The situation in Glasgow is coming to a head. Gangs who have been manoeuvring for power are now on the verge of open war and also under internal tensions as the pressures tell. Jamieson and Francis, the two ‘newcomers’ are both seeking support from one of the older-established and bigger gang bosses. The double crosses and killings mount.

Hitman Calum MacLean sees a chance to quit the life he has come to despise and seizes the opportunities offered by the murders of Francis’ bent accountant and a grass from within the Jamieson organisation. But even the compulsive and perfectionist planner MacLean cannot predict the effect his action will have. And, as always in the background, there is the unappealing but dogged DI Michael Fisher, waiting his chance to bring down the gangsters and their coterie of bent policemen.

Mackay’s sparse and staccato presentation, with few adjectives, devoid of similes or metaphors and without most of the genre’s cliché phrases or situations, not only moves the action at a rate of knots, but also effectively builds tension. Using the points of view of several characters to explain and accelerate the plot through changes in loyalties and perspectives in response to events totally drags the reader deep into MacLean’s dark world.

He plays this trick so well that you find yourself actually concerned over the success of Jamieson’s expansion plans. He may order killings and shift drugs, but apart from that appears a quite nice guy – a portrayal which is more than slightly disturbingly. MacLean is another performer in this exciting and thoughtful story who attracts far more sympathy than he should.

It’s brutal, brilliant, original and often surprisingly witty. Despite the title, there isn’t much graphic violence and what there is, is described in the same flat, downbeat manner as the rest of what is a vivid and often disturbing book – a real triumph of crime writing at its best.