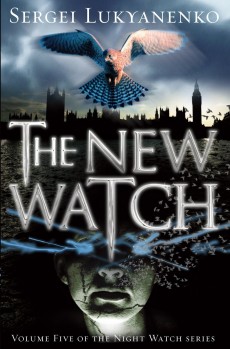 A new type of Other is stalking the world, threatening not only the Light and the Dark, but also the Twilight itself. It’s up to Higher Light Magician Anton Gorodetsky to see what can be done to neutralise this threat.

It’s always said that you shouldn’t judge a book by its cover – although I have frequently done that – and it’s equally the case that judging by the sound bites on the back cover isn’t the best idea. Having said that, I imagine the publishers of The New Watch were delighted to find the book described as JK Rowling, Russian style. But if you’re looking for boy wizards, owls or Hogwarts, this isn’t the book for you.

What you’ll get instead is a very formalised view of magic, with a dualist concept of Light and Dark, given an extra dimension by a shadowy Twilight world, over-grown with rather creepy – and creeping – blue moss, that can be used as a short cut if you get stuck at a set of traffic lights on your way to an incident involving a vampire that’s broken the terms of its Licence. There are spell galore, though, so in that respect lovers of conventional urban fantasy will be on safe ground.

The New Watch is the fifth book in what started out with The Night Watch, the first book in what was then intended as a trilogy. Sergei Lukyanenko starts his latest book with Higher Light Magician Anton Gorodetsky at Moscow airport when he hears a reluctant child screaming that he doesn’t want to go aboard a plane because everyone on it is going to die. Against his better judgment, he gets involved and discovers that the child is a Prophet, a rare type of Other with the gift of foretelling the future. Anton isn’t able to intervene to save the plane, but he is able to ensure that the boy and his mother don’t board it. But then things veer off in an unexpected direction when the plane doesn’t crash after all, even though the prophecy seems to have been genuine.

Anton ends up being pitted against a new type of predatory Other that seems determined to ill prophets, including the boy who didn’t want to catch the plane. The Tiger, as he’s referred to, is a formidable opponent, and the quest to find a way of stopping him takes Anton on a journey around the world from Russia to London and then on to Taiwan, in company with sometime friend and occasional enemy, the Russian witch, Alina.

The stand-out element for me in The New Watch, speaking as someone who has only come to the series with this book, is the quality of the dialogue and the character interaction. The unnamed translator has done a superb job, with not one single awkward turn of phrase or wrongly chosen word. Both the characters and the settings come alive in a way that sometimes struggles in translation, and even the chunks of exposition manage to be interesting rather than dull, especially to someone like me who hasn’t had the benefit of the previous four books.

This is slick, clever, assured urban fantasy, told with style, and shot through with wry humour. Apart from an opener to each of the three sections, the book is narrated by Anton, a character who I now want to know a great deal more about. It’s always a good test of a series if you want to go back and read the earlier books, and for me the world of the Night Watch series is one I definitely want to explore further.