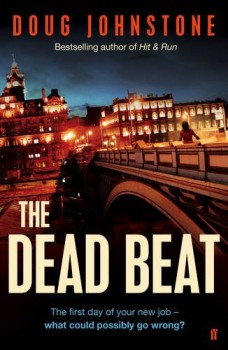 Journalism student Martha Fluke’s first day as a newspaper intern begins with a bang when a man shoots himself in the head while he’s on the phone to her.

The Dead Beat begins with a bang – the sound of the Edinburgh Standard’s obits writer shooting himself in the head while he’s on the phone to work experience girl Martha Fluke. It’s not the sort of first day on the job you really want.

And it’s a touchy subject for Martha anyway, as her journalist father Ian killed himself recently by jumping off a bridge. Her brother Cal wants to forget it all, but Martha’s the kind of person who picks at a scab …

If you know anything about newspapers, you may have to hand your sceptiscim in at the door when you read The Dead Beat. We’re told this is the present day, with newspaper circulations plummeting. But you won’t find local papers with the luxury of a dedicated obit writer or having someone just lay out the family announcements page, sub the puzzle page and write the horoscopes – that could all be done in an afternoon, with enough time for copious mugs of tea. These days, staffing is pared to the bone and everyone mucks in.

If you can get past this, the obit writer conceit is a useful one, which allows Johnstone to muse on what people leave behind them. The story itself is quite slight, doesn’t have a huge amount of tension, and the ending is fairly predictable. That said, Johnstone writes snappy prose and presents a cabal of unusual characters, notably Martha. And I rather liked V, the motor-mouthed, obit-writing female wrestler!

What really makes the book worth a read is the fact that it addresses mental health issues head-on, without flinching – something generally lacking in convincing portrayal in the genre.

Denise Mina’s much-missed Paddy Meehan series oozed newspapers from every pore. I don’t get that feeling so much with Johnstone, but where he scores is with the music motif running through the book. Martha and her brother riffling through her father’s old tapes brings back the 1990s with startling clarity. And the narrative is interspersed with gigs from 20 years ago – Teenage Fanclub, Nirvana, Soundgarden … Excuse me while I saunter happily down memory lane!