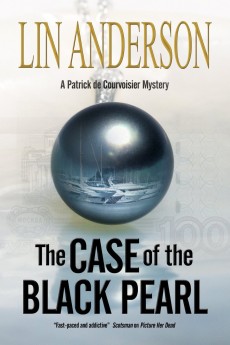 The Case of the Black Pearl

Enigmatic British PI Patrick de Courvoisier goes in search of a missing actress and precious necklace amidst the colour and bustle of the Cannes film festival.

Lin Anderson is the author of a serviceable set of adventures featuring Glasgow forensic scientist Rhona Macleod. Now she’s in James Bond territory with the adventures of the mysterious PI and fixer Patrick de Courvoisier (Le Limier), whose playground is that of the rich and famous – Cannes.

Naturally de Courvoisier, a Brit despite his surname, has a troubled past that is hinted at through the book. He lives on an old gunboat in the older part of town and has a picaresque support team at his capable fingertips, together with all manner of refuges and helpful bolt-holes.

It’s film festival time in Cannes, and the movers and shakers are there in force. A woman asks him to investigate the disappearance of her sister. Beautiful young actress Angele Valette, star of The Black Pearl, was last seen on the boat of Vasily Chapayev, who was funding the movie and who owned the pearl, which has also gone missing.

Patrick isn’t keen to interrupt his civilised existence, but which PI can resist a damsel in distress? And when a dead body turns up on his boat, it all gets messily personal. Cue much rushing around scenic settings, interspersed with bouts of fisticuffs …

The Case of the Black Pearl boasts a cute dog (and here I thumb my nose at spoilers and assure my nervous co-editor Linda that the pooch survives!) and a cast of fairly stock but dependable characters. There are nasty Russians and Scandis, a tart with a heart and an enigmatic copper who may or may not be on the take. And there’s food and wine. Lots of it. Patrick doesn’t allow unpleasantness to spoil his appetite.

The Case of the Black Pearl rattles along very acceptably – and the ending suggests there’s a sequel on the way. The book’s nothing particularly new, but it’s smartly done, very readable and the kind of escapism you want while you’re on a sun lounger, or shivering on the sofa in the depths of a European winter. Apparently there’s a possible film adaptation in the offing, and it’s certainly the kind of all-action adventure yarn that would transfer well to the small screen.