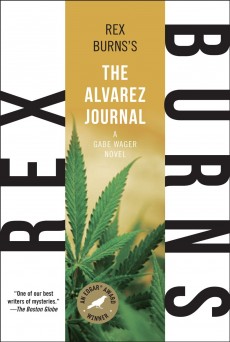 Detective Gabe Wager and his rookie partner get a tip-off which puts them on the trail of a massive shipment of heroin, but the smugglers are smart and Wager must use all his skills to close the case.

This is a timely re-issue of Rex Burns’ 1975 debut with the Gabe Wager series which won the 1976 Edgar Award for best first mystery novel by an American author. Timely, because in an age when American crime writers battle to outdo each other with increasingly fantastic plots, technical wizardry, near pornographic descriptions of violence and almost compulsory sexual athletics, this is a fine reminder that a really well-researched and written procedural can hold the interest just as well.

This shortish story – it’s a little over two hundred pages – takes you step-by-step through a massive drugs bust without any of the now normal dramas or traumas. A procedural at its simplest – and best!

Chicano Detective Wager is a tough cookie. Zero tolerance could be his middle names and he treats his informants with a mixture of bribery and threats, expecting them to deliver the information he requires.

Ex-Marine Burns worked for the Denver DA’s office and received a lot of help from the Mile High City’s police on this and it shows – it’s realistic right down to the budget constraints, the constant need to juggle resources to get results and the internal rivalries among the alphabet soup of US law enforcement agencies.

Cheap, domestic marijuana is being replaced on Denver’s streets by heroin. The police, including Wager’s Organised Crime Division, specially set up to deal with the influx, have no clue how the smugglers operate until a series of low level street busts offer a tenuous lead. Sheer hard work, long and boring surveillance, some judiciously applied pressure and a little bit of luck lead Wager and his partners to a conviction.

If it all sounds as boring as an uneventful night staking out a possible dealer’s house in Denver’s rougher suburbs, think again. This is police work at its best. Wager anchors the story, but his colleagues and the various lowlifes he must deal with are all believable and the dialogue, although it now appears dated, is crisp and accurate.

This is crime and detection stripped down to its bare essentials and portrayed in crystal-clear terms. It’s a clever and fascinating read that any procedural fan will appreciate as a great example of how it should be done.