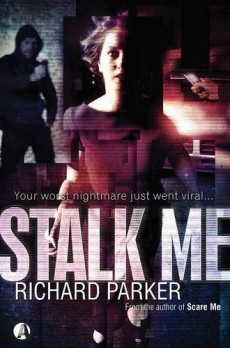 Beth Jordan comes round after a serious car accident to discover she’s been filmed on numerous mobile phones. The footage quickly goes viral on the internet, but then steadily starts to disappear. Beth needs to know why.

Beth Jordan and her husband Luc are involved in a serious road accident when the car they’re travelling in collides with a campervan on a dark road at night in northern France. Luc is hanging next to her in the upturned car, and she’s not sure if he’s alive or dead. Beth manages to climb out of the wreckage, but the last thing she remembers is being viciously kicked in the head by someone who she’d thought had come to help her.

She comes round to discover that a coach has stopped nearby and several of its passengers, a bunch of American teenagers on an exchange visit, are all busily recording the scene on their mobile phones. Understandably, Beth freaks out, and her reactions are captured on camera too. When she comes out of a coma, eight weeks later, she discovers that Luc did not survive the crash. He died of a broken neck at the scene, thrown clear of the wreckage because he hadn’t been wearing his seat belt. But none of that fits with Beth’s memories of the aftermath of the accident.

The footage of the accident taken by some of the coach passengers has been put up on YouTube, practically going viral, with little sympathy being shown for Beth. It’s a sobering reminder of how the first reaction of so many people to a disaster is to reach for their phones and start filming. Everything is public property these days, including pain and grief.

Beth is troubled by the official version of events and finally turns to the YouTube clips in the hope of finding some clues to what really happens. But she quickly realises that some of the clips are steadily being taken down. Some internet digging uncovers the fact that the people who had put up the clips are dead, and Beth is drawn into a cat and mouse game with someone who wants to make sure all the clips – and the people who took them – are permanently taken down.

Richard Parker’s great strength as a writer lies in his ability to create real people who quickly take on a life of their own, no matter how fleetingly they’re on the page. My particular favourites are the O’Doole family, with the harassed mother doing her best to keep an even hand between her two teenage sons, one of whom is slowly dying. The boys bicker, behave badly and generally drive the poor woman to distraction, but when the chips are down, they’re feisty, resourceful and very, very believable.

So too is Beth, Parker’s main character. She’s not Superwoman, and she’s certainly no Sarah Connor, even though the guy who wants her dead does start to bear an uncanny resemblance to The Terminator in the sheer inexorability of his pursuit. But she’s brave and determined, and never crosses the unbelievability line.

My only minor criticism lies in that grizzled old work-horse beloved of crime and thriller writers that really should be put permanently out to grass: the villain who can’t resist explaining the plot to his victim before pulling the trigger. We see enough from the point of view of the killer for there to be other convincing ways out of the Need To Explain The Plot problem to be found.

Despite that, Stalk Me is fast-paced and well written. The scenes with Beth and the O’Dooles are an exemplary piece of action writing that get their hooks into you and don’t let go. It’s a reviewer’s cliché, I know, but I really was turning the pages faster and faster at that stage. The book also induced me to break my rule about never reading in the car. I started reading when we arrived at the Channel Tunnel to sit around for a couple of hours in the Bank Holiday delays, and I finished it just north of Paris when we stopped to change drivers. That’s definitely a first for me.