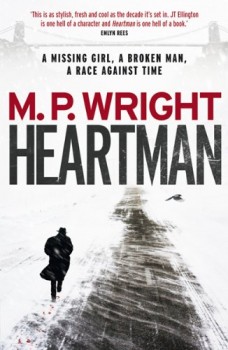 The St Paul’s area of Bristol has seen its share of troubles over the years, and in Heartman, M P Wright shows a community long before the vibrant carnivals of more recent years. In 1965, lodging houses still displayed signs that said: No blacks, no Irish, no dogs. And of the three, the latter stood more chance of a bed for the night.

When Stella Hopkins, a young West Indian woman, goes missing, she barely even merits a line in the newspapers and the police don’t seem very interested, even though Stella, who can neither speak nor hear, is more vulnerable than most. But local councillor Earl Linney wants her found, and he’s prepared to pay good money for the search.

Former Barbados cop, Joseph Tremaine Ellington, JT to his friends, is broke, about to be thrown out for not paying his rent and to make matters worse, his shoes are letting in water. So he’s not really in any position to be picky about what he does for a living, even when asking questions seems to be leading him into some very murky waters.

With the help of his shady cousin Vic, JT starts delving into the world of back-street prostitution, corrupt cops and worse, all against a backdrop of ingrained racism, prejudice and casual violence. Even now, when racism is still an ugly force in the world, it makes hard and uncomfortable reading to look back on a time where the colour of someone’s skin could raise almost universal dislike and mistrust in a city that now prides itself on being home to many diverse cultures. But remember, even seven years later than the time Wright depicts, a mainstream TV channel could still put out a so-called comedy based solely on the premise of a white family having black neighbours in suburban Britain.

M P Wright doesn’t shy away from any unpleasant realities in Heartman. His characters are well-drawn, from JT himself, a man who came to Bristol hard on the heels of the death of his wife and daughter and the ruins of his police career, to kind, good-natured Carnell Harris. The language of the time is unforced even when it’s unpalatable, and Wright does a good job of utilising speech patterns and patois to create vivid word pictures throughout the book.

Heartman is skilfully written, well-characterised and thoroughly engrossing, taking you deep into chilling territory where human life means very little and exploitation is the name of an extremely nasty game. At the end, I was very happy to return to the Bristol I know and love, but Heartman took me on a journey I wouldn’t have missed.