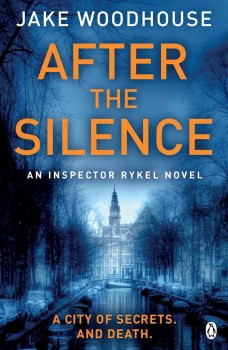 When his partner is killed, Inspector Rykel is barred from the investigation, but is assigned another murder which turns out to be linked.

After the Silence is a police procedural set in Holland, the central characters being Inspector Rykel and his subordinate Kees from Amsterdam, and a female Sergeant, Tanya, from the coast who joins them when an arson and murder there is shown to be connected.

The plot is complex, with many twists and turns. The book begins with the execution of Rykel’s partner Andreas, with whom Rykel had been pursuing a foreign gang importing drugs and women destined for a life of sexual exploitation. Procedure prohibits Rykel from following up the murder, but he is called in to investigate the killing of Friedman, who Andreas had suggested to be the way in to their investigation.

Diligent research suggests that Friedman was involved in a paedophile ring, whose activities go back many years. Tanya joins the Amsterdam team when she finds that a young girl was taken by a suspect with a link to Friedman. Further deaths follow, possibly by a victim seeking revenge, or perhaps by someone seeking to break an evidential trail.

The dramatic tension created by the demand to end the string of deaths and recover the kidnapped girl is compounded by the strains on each of the protagonists. Rykel is full of guilt about his former partner’s death, and the impact on Andreas’s pregnant wife. He is determined to follow up any clues he uncovers, despite the departmental prohibition, and the hostility coming from the De Waart, the officer formally assigned to the job. Kees is habituated to cocaine, a fact he thinks is secret but in fact is evident from his erratic behaviour, and pressurised by De Waart to reveal what Rykel is up to. Tanya is fighting to placate her boss, a misogynist bully who is doing his utmost to undermine her.

During what is a fairly lengthy novel, the slow working out of these conflicts, and the revelations about the background to the crimes under investigation, maintain the excitement well and build to a dramatic climax. The crimes, and the persons responsible, are very nasty, and several colleagues only marginally less so. The atmosphere is unremittingly black throughout.

The Dutch setting is not over-emphasised: books which seek to convey the enchantment of a foreign location by giving the names of every street can be very tiresome. Rykel’s use of the I-Ching and his time in Japan give him a hint of the exotic.

After the Silence is impressive for a crime debut, even if the relentless pace does make it somewhat exhausting. It is stated to be the first in a planned quartet, so presumably further installments are well on the way.