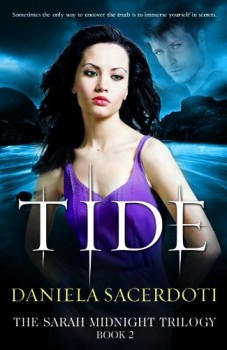 Sarah Midnight is a demon hunter, caught up in a deadly war and not knowing who to trust: Sean, who’s already lied to her, or the mysterious Nicholas who she knows almost nothing about. If she makes the wrong choice, she could die.

Tide is the second book in Daniela Sacerdoti’s young adult trilogy, featuring teenage demon hunter Sarah Midnight, orphaned after her parents died in the ceaseless war against the Sutari, demons from the dawn of time. Sarah is a Dreamer. Her dreams provide the means to hunt down the Sutari as they come through into this world. But Sarah’s parents die before they could teach her what she needed to know to follow in their footsteps.

Dreams, the first book in the series, set the scene for Sarah’s struggle, and Tides builds inexorably on that strong start. Sarah is still reeling from the revelation that the man she’d known as her cousin, Harry Midnight, is actually his best friend, Sean Hannay, charged with Sarah’s welfare by her cousin before his death at the hands of the Sutari.

As Sarah learns more about the shadowy world of Secret Heirs, of which she is one, and the Gamekeepers, their loyal friends and protectors, she doesn’t know who to trust: Sean, himself a Gamekeeper, someone she’d started to have feelings for before she'd discovered his true identity and that he’d lied to her, or the mysterious Nicholas, who'd first appeared to her in her dreams.

Add to the mix, Harry’s widow, Elodie Midnight, plus the charming Secret Heir, Niall and his protector, Mike, and you have a cast of intriguing, sympathetically drawn characters. But without a doubt it’s Sarah who’s at the heart of the book. Everything she’s close to is heartbreakingly stripped away from her, despite all the obsessive-compulsive cleaning rituals she follows in an attempt to create order and security where none exists. Her hands are rough and raw from this, and the portrayal of a teenager struggling to gain the knowledge and training that her parents consistently denied her is as painful at times as it is touching.

The battles against various demons practically leap off the page, and equally well-written is Sarah’s struggle to choose between Sean and Nicholas, but this never descends into a simple tale of teenage angst. Throughout Tides, the knowledge that Sarah is an unwitting pawn in someone else’s game sits heavily on the reader, privy to the thoughts and motives of others in a way that’s denied to Sarah herself, but nothing about this clever, sympathetic book is predictable, as the explosive climax demonstrates.