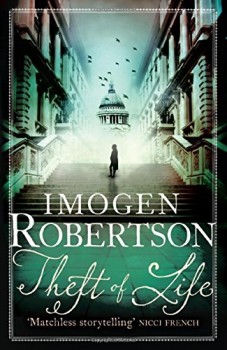 A former West Indies slaver is found dead in the grounds of St Paul’s Cathedral. Gabriel Crowther and Harriet Westerman find themselves investigating wealthy and influential traders in human misery who will do anything to protect their trade and their profits.

It’s taken some time for me to come to grips with the strange friendship between scholar and anatomist Gabriel Crowther and Harriet Westerman, the unconventional – and very modern – widow of a Georgian naval captain, and their unlikely collection of aristocratic neighbours and not so aristocratic friends. But in this fifth in the series set in the London of 1785 and dealing with probably the darkest chapter in British history, Imogen Robertson’s cast come of age and fairly leap off the page with a brilliant dissection and expose of the slave trade with the West Indies.

Where a fashionably noir writer would have exploited the appalling conditions both of transport and slavery on the plantations to its horrifically graphic potential, Robertson deals with the matter sensitively and sympathetically, while never allowing her readers to forget the human cost and misery through often carefully understated descriptions. Even then, she achieves balance, setting out quite clearly how slavery made Britain the most powerful trading country in the world – and laid the base for Empire.

When a former plantation owner is found dead in mysterious circumstances in the grounds of St Paul’s, Harriet and Crowther find themselves investigating the wealthy and influential City traders in human misery who will go to any lengths to protect their trade and their profits.

The plot is surprisingly complex and quite gripping, and for the first time for me, the odd collection on waif aristocratic children in the care of Mr Graves become real, with a moving sub-plot involving one of his wards and an exemplary act of courage by the four older children.

If Robertson has a fault it is that her characters are almost stereotypic – the shady Admiralty ‘accountant’, a forerunner of ‘M’; the hardened Molloy, an 18th century Bond with a heart of gold; the educated and businesslike Igbo and the warrior Yaruba. But to be fair her historical research is impeccable, and her black characters – and some of the white – are based on real-life examples. Her descriptions of place and atmosphere, as well as the treatment of the characters, create a genuine sense of the period.

The gradual acceptance of former slaves in London society foreshadowed a turning of the public mood against slavery, although it would be another 22 years before the trans-Atlantic trade was outlawed and another 26 before slavery in Britain was abolished. For those who thought the West Indian arrival came with the docking of the Empire Windrush, this book should be a real eye-opener.

Even the title serves as a vehicle for Robertson to remind readers that not only murder victims have their lives stolen, but so also did the slaves – and that their sense of degradation and humiliation at being just ‘property’ is something that can never be entirely erased.

Theft of Life is at times an uncomfortable piece, but compelling and necessary reading for those who wish to understand one of the great movements of our history – and be entertained by a cracking story as well.