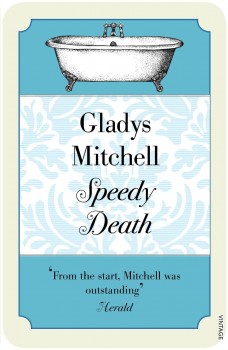 A member of a house party does not appear for dinner. A search of the house uncovers a body in the bath. Mrs Bradley is intrigued and begins to investigate.

A strange collection of individuals has been invited to a house party at the country home of Alistair Bing, an often insufferable retired archaeologist, to celebrate his birthday. There is his daughter Eleanor, and his son, Garde who has invited his fiancée, a friend of his own age, and an elderly woman, Mrs Bradley, who had once got him out of some kind of unspecified difficulty. Also invited is a retired renowned explorer called Mountjoy, and a naturalist called Carstairs.

Things seem to start to go wrong when Mountjoy does not appear for the evening meal. Despite the finding of a body, most of the group maintains a dignified aloofness at first whilst Mrs Bradley and Carstairs consider the situation in more depth. Eventually police are involved and the house party proceeds in unforeseen ways.

This book was first published in 1929, the first novel of an ex-teacher who had an interest in psychology. No doubt some of the happenings might have been thought to be more shocking then than now. For example, the idea of a woman pretending to be a man to the extent of getting engaged to the daughter of the family of her host might seem bizarre now rather than shocking. Similarly, the submissive expectations of the fiancée for her future married life seem outdated now in a society based more on equality.

Excluding the servants from the enquiries for fear of losing them is probably not a concept that could be accepted today either. On the other hand, the idea that membership of the same London club as the Chief Constable makes a man innocent may be more open to question regarding current opinion. However, these notions do not detract from the plot if read in the context of the times.

At times the main characters offer reconstructions of what they think might have happened in the various events. This is helpful in following the plot and the subsequent investigations, although gives no real help in providing the characters with any depth. The dialogue on the whole does not appear dated, although expressions such as “What the devil is....”, “Suicide, my hat.” and “Deuced awkward,” might be unfamiliar to a younger audience today. It is interesting that the use of psychology is seen in the story to be the domain only of experts, such as Mrs Bradley, a sometime psychoanalyst. That the death penalty for murder was still in place at this time gives the plot an edge. The overall outcome certainly provides food for thought and possibly a sense of horror in our modern times.

The publishers are wholly justified in reprinting the book – it is still a good, gentle but thought-provoking read.