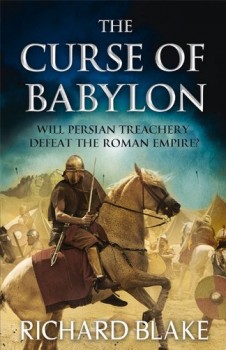 The Curse of Babylon

Amid the plotting, revolts and wild hedonism of the remains of the Roman empire at the beginning of the seventh century, English adventurer Aelric faces his hardest challenge as he tries to stop a Persian invasion – and deal with a determined and dangerous woman.

If anyone produces historical thrillers more completely over the top than Richard Blake’s adventures of Alaric, the Kentish boy who lies, charms, cheats and murders his way the very heart of the collapsing eastern Roman empire, I’d love to read them.

His characters are always vivid, his wild plots devious beyond imagination and with lashings – probably literally – of steamy sex to suit absolutely all tastes and blood by the bucketful, these convoluted, but always fast-paced tales are absolute classics of their kind. Part of their charm is a choice of period unfamiliar to most readers. What little is known of the dying convolutions of the eastern Roman empire based on Constantine’s great city at the junction of two continents indicates Blake has picked fertile ground.

With Rome’s western power only a legend and the Holy City sacked and ruined, ineffective eastern emperors came and went with monotonous regularity – some lasted only days. Constantinople was a hotbed of conspiracies as nobles and functionaries fought each other for control – plots and political murders were a way of life, matched only in their intensity by a hedonistic lifestyle in which all kinds of excess was the norm.

In this sixth adventure, Aelric, to give him his proper English name, has conned and charmed his way to a position of high rank in the court of the emperor Heraclius. His northern distaste for the life of the pretend Romans – the eastern aristocracy was largely Greek – is matched only by his all too obvious enjoyment of their liberal sexual practices.

In what is a blend of conspiracy thriller, laced with some high Roman and Greek philosophy which disguises some sordid and brutal passages and never short of the vulgar comedy which appeals to every generation, Aelric doubles-deals then deals again, to thwart at least one plot against the emperor, mobilises a militia of farmers and peasants to halt a major Persian invasion – and meets the determined and dangerous aristocratic woman who is to be the love of his life.

You never quite know what you’ll get with an anti-hero like Aelric. There’s plenty of darkness in his character, but some surprising light. He’s unbound by any rules other than those of survival and pleasure, and can put personal considerations aside to produce badly-needed civic and financial reforms, treat his slaves like members of his own family and often behave like the legends of the old Rome that he admires.

Great writing, powerful characters, detailed and accurate backgrounds, superbly crafted and unexpected twists make this often dark story a welcome change from the norm. With a lead character like Aelric, you’re never totally certain of what you’re going to get – but what you do know is that it will be a lot of fun finding out.