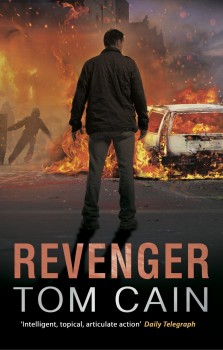 When ex-marine Samuel Carver finds himself in the middle of a riot in South London he has to fall back on his instincts and years of training as the riot turns into a battleground.

Ex-marine Samuel Carver makes bad things happen to worse people. When he finds himself caught in the middle of a riot in South London, he must fall back on his instincts and years of training as the riot turns into a battleground. Someone planned this riot for political gain and now Carver – in the wrong place at the wrong time – looks like the perfect scapegoat.

Carver is wanted by the police for murder, and if he is to clear his name he is going to have to find out who is really behind these events. The truth will shock even Carver – and find him pitted against a deadly enemy who knows all of his secrets and in a fight that will bring him face to face with a killer without conscience.

Revenger starts well and develops the usual pace and thrill that I have come to expect. The moral dilemma that Carver is put in makes a very good premise but by the end of the book I was left feeling a little disheartened and confused. For those that haven't read it I won't give any plot spoilers but when reading this book I got the feeling that Tom Cain just wanted the series to end but had no way of doing it.

Instead, all the characters that have been carefully developed over the series seem to take on whole new personality traits that were never apparent, those that were more than capable of taking care of themselves become helpless, those that always had the ability to think ahead and be one step in front of everyone seem to have developed major blind spots where anyone could see that their course of action was going to lead to the conclusion it does.

I'm a big fan of the Sam Carver series, so when I heard that this would apparently be the final one, I was intrigued to see how Tom Cain would wrap it up. Well, wrap it up he has. This is a wild, dark-hell ride of a book, set in a nightmarish dystopian Britain five minutes into the future. Carver saves the innocent but in doing so becomes the country's most wanted man and has to fight for his and his friends' lives.

The plot is leavened with biting social commentary and no-one escapes unscathed – government, politicians, the far left, the police ... In some ways it reminded me of the underrated Seventies Quatermass TV miniseries by the late, great Nigel Kneale. But the last act of the book is where it really takes off, in a police procedural-style manhunt that rivals the best of Frederick Forsyth.

The book left me feeling rather depressed rather than uplifted. Cain’s previous books have always left me thirsting for more but this one made me think that I just don’t need this sort of misery as there is enough of that in real life.