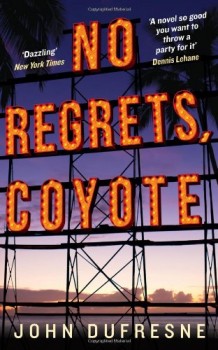 Wylie ‘Coyote’ Melville is called in as a consultant to the scene of an apparent double death, but his doubts lead him into trouble with the local police.

Wylie ‘Coyote’ Melville is a therapist by profession and amateur actor, and is also a sometime forensic consultant for his local police force in Eden, Florida. His policeman friend Carlos calls him in to a scene of a double death, but Wylie finds the scene a little too tidy, and although the police are satisfied with their theory of murder followed by suicide, he starts poking around.

His investigations clearly upset someone, including some of Carlos’ colleagues, and Wylie starts to get some pretty big hints that he should drop the matter. Wylie stays cool under pressure, and luckily has some good and talented friends, including Bay Lettique, an expert in close-up magic, and much else. However, as the threats escalate, it starts to look as though Wylie will be lucky to see an explanation of the deaths before he suffers the same fate.

No Regrets, Coyote is a joy to read. The crime story is pretty dark and its exposition keeps the reader guessing, but it is the other parts of Wylie’s life that are so engaging. We are introduced to some very odd characters who come to Wylie for therapy, the equally odd members of his family – his father with advanced Alzheimer’s, and his overweight sister Venise – and a wide range of other social contacts. The latter include ex-girlfriend Phoebe, who devotes a good deal of time fixing Wylie up with dubious dates, and Red, a homeless man who takes up residence on Wylie’s lawn.

What makes Wylie so likeable is the total lack of ego he displays in dealing with these often very taxing individuals and his ability to maintain his equanimity under extreme provocation. While he sees very well the faults of his nearest and dearest, he is always ready to do whatever is needed to assist. With his father, whose care is a challenge, Wylie is prepared to put in the considerable effort required to stay in close touch, and the final trip they make to see the northern lights is quite moving.

The story of the crime is slotted into the gaps in Wylie’s busy life, and as the dangers escalate, his refusal to back away from the investigation begins to look a little too laid-back. The reader senses that this can only end in something pretty nasty, and is not disappointed. If you have a low expectation of Florida police there is nothing here too far-fetched, although there may be some difficulty in understanding why Wylie was called in to the crime scene at the beginning.

No Regrets, Coyote is full of engaging characters, with plenty of humour and a gripping crime mystery. It’s great fun and difficult to put down.