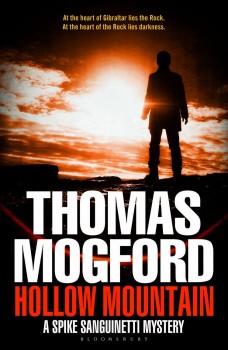 When his legal partner is injured in a hit-and-run, Spike Sanguinetti takes over a marine salvage case where the principals are playing for very high stakes.

Spike Sanguinetti first appeared in Shadow of the Rock, where he took a trip to Tangiers from his Gibraltar base to help a friend. He eventually returned home with Zahra, a beautiful Bedouin girl. When Hollow Mountain starts he is in Genoa searching for Zahra, who has made off in the company of Zigon, an international criminal who resents Spike’s interference and threatens action against Spike’s family and friends if he perseveres.

Spike has to return to Gibraltar when his friend and legal business partner Peter is the victim of a hit-and-run. Of Peter’s caseload, the most significant concerns the Trident, a salvage vessel recovering lead from a wreck in the harbour. Silver has also been discovered, and Spike’s help is sought to establish legal rights over this for Trident’s owners. But there is something odd about the claim, which Spike soon realises may be connected to both Peter’s accident and an apparent suicide of a man whose family approach Spike for help.

This latest book in the Sanguinetti series maintains the high quality of its forerunners, with a gripping story of criminal enterprise and plenty of underlying menace. As ever, the background setting of Gibraltar provides a fascinating mixture of familiar and prosaic aspects of UK transplanted into an exotic location, an international crossroads with a Mediterranean feel but its own idiosyncrasies and traditions. Mogford’s very derogatory depiction of both locals and visitors creates the impression that the reader is getting a view more realistic than that obtained from travel brochures.

Spike himself has the magnetic attraction for women possessed by all the best heroes, but also has a very in-your-face attitude which makes him more human, as well as the subject of dislike by a range of criminals. The threats which Spike faces are made manifest by brief occasional sections in italics, told in the first person by an unnamed person who is keeping Spike under observation and clearly has hostile intentions.

Mogford has several plot lines running through the book in addition to the Zahra and Trident stories. Spike’s mother committed suicide for reasons Spike only begins to understand after he reads some of her old letters and he has a contretemps with his ailing father. Despite his love for Zahra, he manages an affair with a new acquaintance during the book, and remains close to Jessica, a police Detective Sergeant and an old friend. In fact to Spike, Gibraltar is full of old friends and sometimes sounds like a village.

The combination of an engaging protagonist, plenty of interactions and action, sharp dialogue and a colourful environment make Hollow Mountain as equally entertaining as its predecessors.