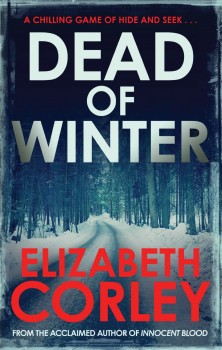 A schoolgirl disappears from a private school, and police seem one step behind as freezing weather closes in.

Isabelle Mattias is an independent 17-year-old from a wealthy family. When she disappears from her private school one freezing winter night, the resulting search appears to have the police permanently one step behind as the weather worsens.

It’s five years since the last book appeared in the Supt Andrew Fenwick and DI Louise Nightingale series. Elizabeth Corley has a good excuse for the delay, though – she’s CEO of a big financial organisation and apparently writes in the evenings for relaxation.

Corley can tell a good story and is a meticulous plotter. She paints vivid scenes, particularly using the winter weather as a plot device. The problem, though, is Fenwick and Nightingale. They weren’t that enticing in the previous outing and are even less so here. Quite why he’s so grumpy is unclear; she is rather like a panting adolescent, as she stares doe-eyed at her superior officer.

It’s not at all clear why Fenwick is sent back from the Issie investigation, seemingly with his copybook blotted, considering no one else covers themselves in glory. It’s possible there’s past history between him and the top brass that’s been mentioned in earlier books, but if that’s the case, it needs a brief recap – no author can assume that people read their series in order, or read all the books, especially when there’s been some years between books (the first in the series appeared in 1998, and Dead of Winter is the fifth).

It’s a long book, generally well-written, but in need of an edit to deal with a saggy middle – at one point I’d almost forgotten about Issie. I found it difficult to work out how much time was passing, even with Christmas as a marker. It reflects the slow pace of investigation, but an over-reliance on realism doesn’t always make for good storytelling. Nightingale’s sub-plot where she’s trying to track down a rapist is rather subsumed in what’s happening (or not, as the case may be) elsewhere.

Issie is enterprising and gutsy. She and her family fare better in the characterisation stakes than, ironically, do Fenwick and Nightingale. The blustering stepfather and seemingly weak but manipulative mother have far more shades of grey than the two lead characters. By the end, about all I could remember was that Fenwick’s kids were fed-up with never seeing him, and Nightingale was lonely in her draughty flat.

Dead of Winter is chilling in all senses – it’s clinical, harsh and pulls no punches, and benefits a great deal from being set during a severe weather warning. The final scenes are a thrilling race against time when temperatures have plummeted and the snow is piling up.