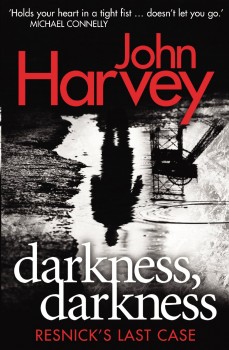 Charlie Resnick comes out of virtual retirement to help investigate the murder of a woman during the miners’ strike 30 years ago.

The old guard are staunchly refusing to be pensioned off. Ian Rankin’s Rebus has muscled his way onto the cold cases team, and thence back onto the job. Charlie Resnick, the hero of John Harvey’s foremost series, has returned to investigating as well – but Darkness, Darkness is his swansong.

Ghosts from the past won’t lie down, though. Thirty years ago, Nottinghamshire was one of the counties riven by the miners’ strike. Resnick, newly promoted to DI, was running an information-gathering unit, and was ambivalent at best about police tactics. It was a time when the police were loathed for their behaviour on picket lines. And memories are long.

Resnick, still mourning the death of his partner, is working in a civilian support role for the police. But his contacts and memory are invaluable when the body of a woman who disappeared during the strike is discovered beneath some demolished houses.

DI Catherine Njoroge draws the short straw for investigating the case, which her superiors assume is too cold to solve. But she and Resnick make a tenacious team as they struggle against the long memories and grudges of the mining community, and the police force dinosaurs who assume Catherine has only been promoted because of her sex and colour.

There’s a lot bubbling below the surface of Darkness, Darkness, as Harvey examines violence against women, sexism within both the mining community and the police, and the way the police are perceived, particularly in times of civil unrest. And it’s an entirely topical book, given the death of Margaret Thatcher.

Darkness, Darkness is the 12th book in a series that dates back to 1989 and that has always been rock-solid. As with Rankin’s books, there has never been a totally convincing TV adaptation – Tom Wilkinson’s portrayal of Resnick for the BBC in the 1990s was adequate, without setting the world alight. Possibly the jazz-loving, coffee-drinking loner with no strong sidekick didn’t translate that well onto the screen.

This is a superlative book – Harvey has undoubtedly saved the best until last. The pacing is immaculate, the movement between past and present seamless, the characterisation convincing and the ending appropriate for our hero. This is a worthy swansong for one of the genre’s most convincing detectives.