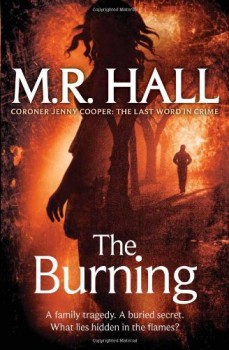 Coroner Jenny Cooper has to dig deep for the truth in a horrific case of family annihilation in the Wye Valley.

M R Hall’s series featuring Bristol coroner, Jenny Cooper, is an interesting mix of professional procedural and amateur sleuth. Whilst it’s true that a coroner’s job is to get at the truth of a death, it’s unlikely that many of them do quite as much detection work as Jenny does. However, if you can suspend disbelief for the central premise of the books, they provide a satisfying read.

The Burning is set in the snow-bound Wye Valley in the depths of winter and opens with a short prologue that, in common with so many these days, seems to add very little to the narrative and is all too easily forgotten. The main story starts soon after when Jenny Cooper is taken to the scene of a house fire that has killed three people – a teenage girl, her younger sister and their stepfather. A third child, a boy of three, is missing, and a message placed on their stepfather’s face book indicates that the boy, Robbie, has also been taken and killed but there’s no clue as to where he is.

When the bodies are examined, it seems likely that the two girls were killed by their stepfather, Ed Morgan, who then subsequently killed himself. It’s all seemingly an open and shut case so far as the police are concerned. But Jenny has her doubts.

The fog that envelopes much of Bristol and Gloucestershire runs parallel to the fog that clouds Jenny’s thinking for much of the book. Her relationship with Michael, a pilot suffering from post-traumatic stress disorder, and who now seems to be edging closer to settling down, comes under threat, and she finds herself getting closer to the well-dressed and extremely personable DI Gabriel Ryan from Gloucester.

Jenny has to balance two cases through much of the book and although I guessed that her secondary investigation into the suicide of a transgender man who worked in the passport office was likely to be connected in some way to the main investigation, it was hard to see how, although ultimately all loose ends are tidied up, if not wholly resolved.

As well as problems in her private life, Jenny has to cope with the return to work of her assistant, ex-police offer Alison Trent, who saved Jenny’s life. Alison has returned to work without having been formally cleared as fit to be at work, but the injuries she sustained in that incident look to have had lasting damage, leaving Alison with little in the way of a filter between her brain and her mouth. Not a good trait in someone who has to deal with delicate situations, but Alison does manage to bring a great deal of humour to the book, to lighten the, at times, oppressive atmosphere.

The book is well-grounded in Bristol and the surrounding area, but it’s hard to understand why Hall chose to set the denouement at Filton airfield, which closed to traffic before this book is set, rather than at Lulsgate, south of Bristol. But other than that, Hall has once again produced a complex web of intrigue and deception in an atmospheric setting. The people feel as real as the settings and Jenny herself continues to develop as a character, adding depth and humanity to a complex narrative.