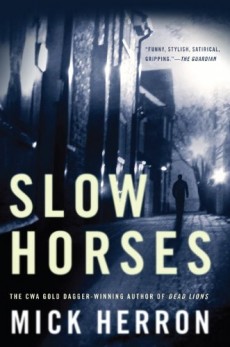 A man is displayed bound and hooded on the internet with the information that he will be beheaded in 48 hours. Jackson Lamb, head of MI5’s Slough House, does not subscribe to the general view that this is Al-Qaeda inspired and begins an investigation.

Mick Herron’s Slow Horses, first published in 2010, was short-listed for the Ian Fleming Steel Dagger Award. He went one better with the publication of Dead Lions in 2013, winning the prestigious CWA Gold Dagger Award. It is not surprising that the publishers seized the opportunity offered by this success to bring out the first book again.

As the author makes clear from the beginning, Slough House is not in Slough, but in Finsbury, near the Barbican. Even before John Betjeman’s famous wartime poem inviting friendly bombs to fall on Slough (“It isn’t fit for humans now”), the town was regarded as a dreary place to live and was the butt of many jokes. When the ‘real’ MI5 in Regents Park wanted a name for a dumping ground where disgraced officers could spend their days in oblivion, they chose Slough House because they couldn’t think of anywhere worse. It is dirty, damp, ramshackle and desperately in need of a lick of paint – a description which, with a certain degree of poetic licence, might also be applied to its occupants.

Most of these are common to both books. Jackson Lamb, the head of Slough House, himself under a cloud, although a mysterious one, supervises the assorted bunch. River Cartwright finds himself condemned to Slough House following a botched surveillance assessment, although he maintains that he was given inaccurate information. Min Harper had unaccountably left an important file on a train and Catherine Standish had developed too great an affection for alcohol. There had been a reason for that and it had been associated with the service but it wasn’t one to which the service had been prepared to listen. Very movingly, Herron describes how, without anybody even beginning to understand why, she had arrived at a point where she was standing up in a group of people and saying: “My name is Catherine and I am an alcoholic.”

When the image of a hooded man tied to a chair is shown on the internet, with the threat that he will be beheaded in 48 hours, the occupants of Slough House, with one exception, believe that it is the work of Islamist fanatics. They are familiar with such scenes and feel that, although they have never occurred in the UK before, perhaps it has only been a matter of time. The exception, however, is Jackson Lamb and in Slough House his opinion isn’t simply an opinion. It is the truth or at least what his underlings have to regard as the truth. He makes it clear that he doesn’t for a moment accept the Islamist fanatics theory and when they manage to discover the man’s identity he decides that his slow horses are going to speed up and work as a team to find out what is going on.

From this point on the excitement builds and is maintained right up to the very end. The plotting is subtle, detailed and utterly convincing. The technique employed also changes and a somewhat leisurely, almost discursive, approach gives way to a sequence of short, vivid scenes told from various viewpoints. It may involve one of the Slough House teams, each of which has been allocated a specific task. It may describe the actions of Regents Park officers because they are not by any means working alongside Slough House. We also have episodes involving the kidnappers where we begin to see that Lamb’s initial suspicions are well founded. The reader’s attention is held, as it becomes obvious that the attempt to locate the men and save the life of the prisoner will be desperately close.

The situation is complicated by the fact that it is not simply a case of MI5 versus the kidnappers. It becomes clear that ‘the Park’ and Slough House are pursuing different agenda.  All the power and influence is wielded by Diana Taverner and ‘Spider’ Webb in Regents Park. They have, however, reckoned, without the sheer bloody mindedness of Jackson Lamb. Furthermore, he manages to inspire his collection of misfits until they too share his determination to prevent the impending murder.

From being a collection of failures employed on repetitive, mainly pointless tasks, they suddenly become the people they wanted to be when they joined the service. This is particularly true of Catherine Standish who shows powers of deduction and leadership that surprise her colleagues.  We realise that, whether or not they manage to prevent the murder, they are capable of rising above past failures and once more taking a pride in their work.

This novel is the first in a trilogy concerning Slough House and its incumbents and at its close the reader finds himself hoping that at least some of them will be given another chance to do something worthwhile. On the other hand, there will be – perhaps the implication is that there will always be – those whose interests are served by keeping them where they are and ensuring that they don’t prosper. That is what is meant by politics.