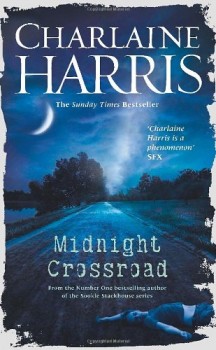 Midnight is a town besieged by secrets and unanswered questions – when a newcomer arrives and people start dying, it may be more than the townsfolk can handle.

I am not a fan of Sookie Stackhouse. There, I’ve said it. But with Midnight Crossroad Charlaine Harris has a new fan.

This is the first in a new trilogy from Harris about the inhabitants of small Texan town, Midnight, all of whom don’t belong anywhere else. Everyone has a secret or two, people are dying and no one is talking.

The prologue is something of a necessary evil. Its childish meandering through the town, all written in the present tense, serves to introduce the reader to the town’s geography and inhabitants. After two paragraphs of this I had sworn to throw the book out of my tent if it continued in this way, but fortunately it didn’t.

Instead chapter one shows us that Harris is trying something new. In a departure for her, Midnight Crossroad is written in the third person, happily allowing us to experience multiple characters’ points of view. This includes writing for male characters, another first for Harris.

It’s the characters who make this novel; the crime and subsequent investigation are more like sub-plots that just let us explore the residents further. Any more plot detail will just ruin the surprise. Friendships are subtle and believable, and stories gradually told, but there are still enough secrets and hidden back stories to keep me wanting more.

Harris has brought over two characters, Manfred Bernardo and Bobo Winthrop, from previous novels, a fact I didn’t discover until I had finished the book and don’t feel that I missed anything from not knowing them before. There is a nice blend of human, not-so-human and supernatural characters, and yes, don’t worry, there is a vampire.

With that said about characters leading over plot, by the end of chapter three we are not only introduced to the major players, but are also already embroiled in the first mystery of the book, with both us and the townsfolk starting to question what is going on. From there the pace continues until the end, including a side-step or two that I didn’t see coming.

And the breadcrumbs for the sequel’s mystery have already been dropped.

Julee Sanderson is an avid camper who works at Kingston University and is lucky enough to be paid to write for a living.