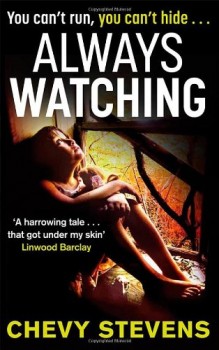 When psychiatrist Dr Nadine Lavoie treats a suicidal woman who has been living in a cult, it brings back long-suppressed memories of a childhood summer spent in a commune.

Psychiatrist Dr Nadine Lavoie is widowed, with a grown-up daughter, Lisa and a stepson, Garrett. She suffers from claustrophobia, which her therapist believes is the result of childhood trauma, but she has no memory of any trauma. She works in the Acute Psychiatric Unit of the hospital in Victoria, British Columbia, where one of her patients, a suicidal young woman named Heather Simeon, reveals that she has been living at the nearby River of Life spiritual centre run by a charismatic leader, Aaron Quinn. Heather and her husband Daniel have left the centre and she is being bombarded with calls from the cult members.

As soon as she hears Quinn’s name, Nadine is carried back to the summer when she was 13. Together with her brother and her mentally unstable mother, she spent that summer living in a commune in the mountains. Quinn, then in his early 20s, took on the leadership of the commune and claimed that he alone could ensure that the members could ‘cross over into the Light.’ The commune rapidly took on the characteristics of a cult as Quinn increased his control over the members, frequently taking the female members aside for ‘private meditation’ and using an enforcer to make sure no-one stepped out of line.

Nadine starts to have flashbacks to that summer and returns to the scene to see if more memories will be unlocked. She remembers a friend who disappeared and the accidental death of one of the members, but as her memories return she realises that there are darker and more troubling secrets and that the now rich and famous Quinn is prepared to take any action to prevent the discovery of his crimes, both past and present.

This is a compelling story as step by step the details of the abuse suffered by Nadine and by other cult members are revealed. The three elements of Nadine’s life in Victoria, her trips back to her hometown of Shawnigan and the slow revelations of past events are seamlessly entwined to produce a real page-turner. Nadine’s psychiatric training gives her insight into her own reactions to the memories, helping the reader to understand her journey. Many of the characters are not as they first appear and there are several surprises as the story reaches its horrific climax.

The writing is tight and the plotting is fast-paced. Throughout the book, the characters and their reactions are utterly believable, including the minor characters, This is Chevy Stevens’ third book and the previous two both used the device of the protagonist telling their story to a therapist. We are very much in the same territory with a psychiatrist as protagonist in this one, but it does allow the story to be viewed from a psychological point of view. Always Watching is a gripping and well-written tale.