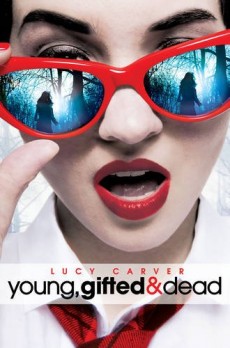 When a teenager at an exclusive boarding school, St Jude’s Academy, is found dead in a lake in the grounds, the school is keen for her death to be judged a suicide. But one of the dead girl’s roommates isn’t so sure. Is there more to Alyssa’s death than meets the eye?

School stories have certainly moved on since the days of Malory Towers, St. Clare’s and the Chalet School, as Young, Gifted and Dead proves. This is a book that certainly shouldn’t be judged on its cover. It’s easy to miss the hint of something deeper on a cover dominated by a red-lipsticked teenager in a pair of red-framed sunglasses.

Based on first impressions alone, I was expected the book to be set in an American high school and not in the UK in an exclusive boarding school in the Cotswolds, mostly catering for the privileged children of the rich and famous. But it soon becomes clear that is very definitely a murder mystery rather than a teenage romance.

The narrator is Alyssa, the new kid on the block, a bright, sparky teenager with the blessing – or maybe the curse – of an eidetic memory. You name it, Alyssa can remember it, and in the aftermath of the death of one of Alyssa’s roommates, that turns out to be a dangerous attribute. Alyssa is by no means convinced by the party line that the brilliant but unstable Lily Earle killed herself because of some unexplained family trauma, so she starts digging around for information. When Alyssa is nearly run down by a motorbike in the nearby village, it becomes clear that someone wants to scare her off, but she’s not the sort to be easily deterred.

Alyssa makes a lively and amusing narrator, and reminds me a lot of Jane Casey’s gutsy main character, Jess Tennant. Both girls are smart, tougher than they look, and as tenacious as a terrier after a rabbit. And they’re both people you’d very much want on your side. The book is peppered with sharp asides to the audience and Alyssa’s narrative never loses pace. There’s plenty of tension between the pupils at the exclusive, fee-paying academy and the teenagers who go to Ainslee comprehensive. And suspects are certainly not in short supply as Alyssa starts to uncover more of what went on in the run-up to Lily’s disappearance from St Jude’s.

There’s been a definite shift in attitude from a time where the worst thing that happened in a school story was Darrell Rivers giving the school bully a jolly good slap in the swimming pool. These teenagers drink, swear, go to parties and have sex. In short, they act like real teenagers and all this creates a convincing setting.

But there’s nothing predictable about Lucy Carver’s characters or her plot, except possibly for the ‘Breakfast at Southfork’ style of ending, where the villain of the piece decides to confess all, explaining their methods and motivations in case you’ve missed any of the clues. But that need to sit down and discuss the plot is something that afflicts characters in the adult side of the genre as much as those in books for a younger audience, so I’m not going to lay too much stress on that particular flaw, especially not in the context of what turns out to be a rattlingly good climax.