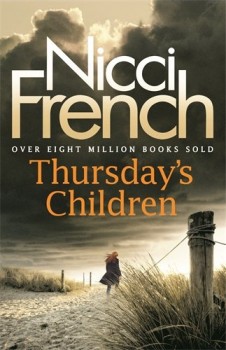 A new client for psychotherapist Frieda Klein forces her to return to events of the past that she would rather forget.

Thursday’s child has far to go. When psychotherapist Frieda Klein answers the door to a woman she was at school with, she has no idea that a seemingly simple request will take her back to a place and time she has worked hard to forget – her childhood.

At first Becky seems like any other troubled teenager but when she confides in Frieda she reawakens thoughts and feelings that Frieda has not revisited despite years of personal therapy. Now she has no choice. On the way she makes some painful reconnections with family and friends. Everything comes to a head at the school reunion when it becomes clear that the past is still affecting the present and there is yet another death. Can Frieda put a stop to this once and for all?

I was intrigued by Frieda’s personal relationships which seem to be fairly chaotic, both in the present and the past. This chaos does, however, give them an air of authenticity, with the possible exception of her former therapist-turned-personal confidante which seems to blur the lines between professional and private.

Having said that, it mirrors Frieda’s own dilemma – how can she get justice for Becky (a client) without revealing her own personal struggle.  On the way her reconnection with her mother and former friends reveal the formative influences on the troubled teenager who becomes the successful, but slightly brittle psychotherapist. In a similar way the school reunion comments on, and parallels, the event which started it all – a concert by the group Thursday’s Children. What one started the other will finish.

This is a tense, page-turning novel with enough twists and turns to make the end both unpredictable and satisfying. Anyone who has ever endured a school reunion would identify with many of the emotions portrayed. The fact that it is the fourth in the Freda Klein series written by Nicci Gerrard and Sean French is to some extent irrelevant.  All you need to enjoy this psychological thriller is contained within its pages, but I suspect certain aspects of the back story would be illuminated by reading the first three. That is something I now intend to do.