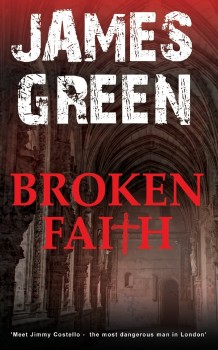 Jimmy Costello, a corrupt ex-Met detective, and now a ‘fixer’ for the Vatican, is sent to Spain to check a story that a senior cleric is involved with the Basque terrorist movement. The man he must talk to is killed and Jimmy has to solve the mystery – and also deal with some unwelcome reminders of his violent past.

Jimmy Costello is a former corrupt Met detective sergeant whose past has instilled in him a predilection for violence, together with the ability to use it. Wherever Costello goes, a trail of bodies follows. Despite his record, he’s not a bad man. A reluctantly practising, but failed Catholic, he retains enough of his faith to believe in a narrow form of justice – those who live by the sword should die by it – and if necessary he is willing to be the architect of their end.

In this fourth adventure, Costello’s attributes have ensured he becomes a ‘fixer’ for the Collegio Principe, an obscure department of the Vatican. Founded by Cesare Borgia, the devious and brutal bastard son of Pope Alexander VI, the Collegio is tasked with studying the relationship between religion, politics and power. In fact, its job is to bury major scandals.

Far-fetched? Think Banco Ambrosio, the ‘suicide’ of Roberto Calvi under Blackfriars Bridge, the alleged links between Vatican banker Cardinal Paul Marcinkus and the Sicilian mafia, the 2012 leak of Vatican documents, the older dramas of connections to the Croatian Nazi killers of the Ustashe, and the murder of the commander of the Pope’s Swiss Guards, Alois Estermann. If the Collegio doesn’t exist, it should.

Costello is tasked to check a story that a senior cleric is deeply involved with the Basque terrorist organisation ETA. The man he is sent to Santander to see is killed before they can speak and Jimmy is determined to discover why. With the help of an attractive English-speaking Spanish detective, he begins to peel away layers of deceit – and uncovers unwelcome links to his violent north London past.

When it becomes even more personal, Costello, acting, for once, totally on the side of the angels, ignores his own orders to ensure justice is done. Even the ending is sublimely in keeping. Never let your left hand know what your right is doing would be a great motto for the Collegio.

Former headmaster James Green is perhaps better known for his ambitious ‘factional’ series on the development of the American intelligence services. The depth of research and clarity of thought and writing that has gone into that series is just as rigorously applied to his Costello books.

Somehow he manages to skip between two such widely different time periods and genres – and if, like me, you’re bored with endless, improbable serial killers and near-pornographic descriptions of drugs, sex and violence, Costello’s occasional humanity, down-to-earth anger, detective ability and sheer normality is a real tonic.