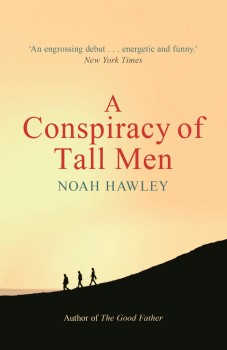 A Conspiracy of Tall Men

Linus Owen is a professor of conspiracy theory whose life is thrown into disarray when his wife is killed in a terrorist attack on an aircraft. He uses all his resources to seek answers.

The arrival of government representatives to break the news of the death of a wife in an aircraft bomb is a shattering event, even more so when she was accompanied in death by a man with whom it appears she was having an affair. Linus Owen is prostrate with grief, but driven to uncover all the circumstances in detail.

Linus is, in fact, well equipped to bypass the misleading and emollient pap put out by the airline and government agencies and get to the truth. He is professor of conspiracy theory at Modesto College in San Rafael, California. He ‘believes there is a clandestine cabal running the world. A machination comprised of bankers and businessmen, military leaders and intelligence agencies,’ or so he lectures his students.

He has contacts with a number of like-minded people who have access to hidden information, and quickly finds that what is being put out to the public falls a long way short of the truth. His search for answers, however, brings him into conflict with the powerful agencies he lectures about.

The story is told in the present tense and follows Linus throughout, with brief interludes concerning the fate of Roy and Edward, two loser friends of his who are enlisted to help. The portrait of a man in confusion and despair is most convincing: Linus reviews at length the evolution of his marriage, which in truth was in trouble, but there is no doubt of his love for his wife. At the same time his grief does not distract him from his pursuit of the truth, and from the start it is clear that his belief that secrets are being concealed is fully justified.

Although many aspects of the conspiracy do not emerge until the final pages – indeed, many remain ever a mystery – we learn a good deal from the brief biographical summaries given about the people with whom Linus comes into contact in his search. These thumbnail sketches give a vivid picture in a few deft sentences, and are frequently extremely funny, whether they depict those obsessed with conspiracies, or those from the shadowy government agencies which populate them.

For a debut novel, A Conspiracy of Tall Men is very impressive. It was written in 1998 and given the increased currency the internet gives to conspiracy theories, may have been ahead of its time on first publication. It still feels very current.