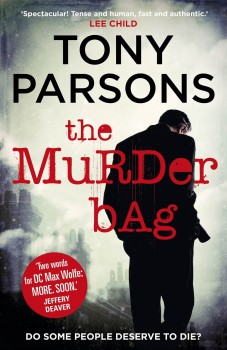 Maverick cop Max Wolfe has been shunted sideways – and must find out who is picking off former public schoolboys one by one.

Those of us of a certain age remember Tony Parsons when he and Julie Burchill were the enfants terrible of the NME. More recently, both of them seem to have morphed into vaguely establishment writers – and Parsons has now moved into the genre fiction playground.

If you’re someone who demands absolute reality in the way the police operate, then The Murder Bag probably won’t bear too close a scrutiny. And there’s a vaguely distracted air to the whole narrative that might not be to every reader’s taste.

The book kicks off in gruesome style with what appears to be the gang rape and murder of a teenage girl. It them cuts to the present day where police are shadowing a suspected suicide bomber. And it’s here that we realise that the central character, Max Wolfe, has maverick tattooed on his forehead.

Max is a single father, who lives with his daughter Scout (I am gallantly resisting making comments about characters and daft names), and their cute dog in a trendy flat overlooking Smithfield meat market.

His colleagues, with the exception of young trainee DC Edie Wren, seem to leave him to get on with things. And there’s plenty to be digging in to as a serial killer is picking off former public schoolboys one by one.

The murder museum thread is rather intriguing, but a tad forced. And that’s how much of the book feels – maverick hero (check), quirky flat (check), lousy love life (check), smart sprog (check), belonging to a boxing club with the plebs (check).

Parsons managed to put some backs up even before the book was out, with some ill-considered comments about the genre. It clearly doesn’t occur to some of these writers who have made them names elsewhere and are playing in our sandpit for the first time that we haven’t been sitting around waiting for them to ride in on a white charger and set the genre to rights.

I’ve certainly read far worse than The Murder Bag, but without Parsons’s name to sell it, I’m not sure it would pick up much attention. It’s solid but unremarkable, and the ending certainly isn’t anything out of the ordinary – although the final page twist had me sitting up in bed a couple of hours later and saying: “No, sorry, he’d have spotted that way back!”