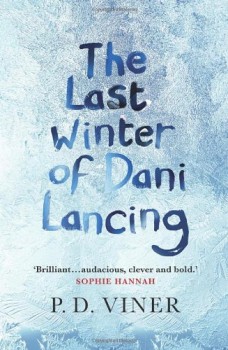 The Last Winter of Dani Lancing

Student Dani Lancing was brutally raped and murdered. Twenty years on, her death is still affecting the lives of her parents and the man who had loved her since childhood.

Compelling is a word reviewers use far too often, but this highly original and emotionally charged debut from P D Viner is just that. This strange, deeply-layered psychological thriller is less of a crime book – although murder, rape, drugs and police corruption all play a part – than a clever and often moving and examination of the ripple effects the damage from a single killing can inflict on the survivors.

Dani Lancing was horrifically raped and murdered. Twenty years on her parents’ already rocky marriage has broken down. Her father, who still regards her as his golden girl, talks to her regularly and believes he can still see her. Is he talking to a ghost or are these strange episodes happening in a mind unhinged by loss? Her mother has seen a brilliant journalistic career crumble beneath the weight of an obsession to find and have her revenge on the killer. The man who pursued her with an unrequited love from childhood days has become a senior detective, heading a special team investigating the murders of at least three other girls.

The news that advances in forensic science mean that the case is likely to be reopened accelerates and focuses the problems of all three as Viner strips away the layers of mystery surrounding the months leading up to Dani’s death. The father must face the unpleasant fact that the innocent child he doted on was not the flawed adult who died. The mother, driven by her anger and need for vengeance, must live with the possibility that she herself is a killer – and that she has murdered an innocent man. The detective faces questions about his own motivation – and how far he is prepared to go to keep his promises to Dani and the other dead girls.

Viner keeps the reader at arm’s length, drip-feeding information the characters alone know as he ratchets up the tension. It’s an unusual narrative, skipping from past to present and spending time inside the heads of the major players, but is solidly and tightly written, with some unexpected twists. But it’s the strong central characters themselves who make this chilly tale so different from the norm – and at times heart-wrenching, particularly in the scenes between Dani and her father.

This inventive, exciting and often moving thriller makes an impressive debut. The denouement, showing that the same feelings can motivate evil and as well as good, is a final inventive leap from someone who presents his case with intelligence and feeling – and expects the same from his readers.

One black mark though. Detectives do not wear uniforms with insignia. Apart from that minor cavil, this is one of the best first novels I’ve come across – and to use that word again, truly compelling.