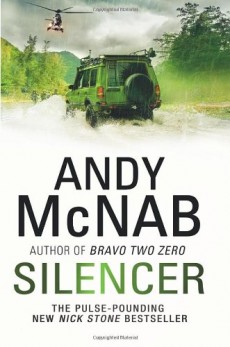 Nick Stone’s past has come back to haunt him, and he has to find out who wants him dead and also protect his family.

It's 1993, and Nick Stone is in Costa Rica working for MI6. Stone's kill shot on drug lord the Wolf is made difficult by the presence of the target's wife and kids, and when Stone confirms the kill they see his face.

We skip forward to 2011 and Moscow, where Stone's girlfriend unexpectedly goes into labour. Picking up things from his apartment, sometime tries to kill Stone. He learns his whole family are in danger, and his search for those who want them dead takes him to Moldova, Hong Kong, China, Virginia and finally Mexico. It's linked to his girlfriend's doctor, Katya. His past has come back to haunt him, and he has to finish it to protect his family.

Silencer is Andy McNab's 15th outing for Stone, and our hero has lost none of his violent vibrancy. The opening chapters are full of McNab reality, and he does a great job of dragging you down into the leaf litter. Stone is no James Bond – he's a self-confessed 'squaddie dickhead' who gets the rough end of the stick.

Stone has finally been dragged into the 21st century. Gone is the reliance on his Casio watch, and it's in with his iPhone and Google Maps. But Stone still thinks about the past, giving us one of those classic McNab lines as he describes cash as “for beer, paying bar-fines, and saving up for a second-hand Ford Escort XR3i.” He doesn't carry a gun for much of the book, but of course that doesn't stop him from inflicting bloody harm on a variety of opponents using whatever is to hand, starting with a TV remote control.

This is a Nick Stone with new priorities. He's living in Moscow when his baby is born prematurely. But there are no happy family snaps for Stone, of course. And when it all goes wrong it doesn't even seem like it's his fault.

It's a book with convoluted plots and a lot of threads, but it's just about possible to follow what's happening and why, as Stone traipses all over the globe tracing lead after lead. McNab certainly packs multitudinous means of death into the book. His books are not for the faint-hearted, and this one is no exception. Stone himself suffers an array of pain and captivity in Silencer, which really push the boat out in terms of the unusual and horrific, something McNab does excellently.

This is also at times an introspective and honest book, which seems odd for a semi-military thriller focussing on illegal trade in human organs and drugs. But Stone has to face his failure to prevent a picture of himself slipping through his careful net (something McNab focusses on in his own life), and he starts to help an old colleague deal with his PTSD.

The final showdown is fast-paced and full of tension, with enough mayhem and violence to keep the average Stone reader happy. Despite being an established character, you don't actually need to know Stone to read Silencer. Everything you need to know about him is laid out for you in raw, bloody detail. It's a stomach-turning action thriller, with a slightly wobbly middle, but has a very Nick Stone ending that brings a smile to your face. Just don't expect happily ever after.