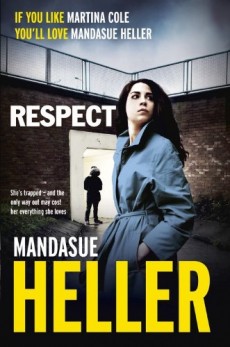 Her mother has run off to Spain with a bloke, leaving 15-year-old Chantelle to look after her younger brother and keep the debt collectors at bay. But her brother is in with a gang and Chantelle is on over her head and sinking fast.

Mandasue Heller writes with gut-churning realism about life on Manchester’s sink estates, home to gangs who deal drugs and fight each other for that most precious of commodities: respect. Without that, you’re nothing. And so the title of Heller’s 13th book was born.

Fifteen-year-old Chantelle likes books and wants to do well at school, which makes her the complete opposite of her drunken, thieving mother, Mary, a woman for whom the word feckless could have been coined. When Mary disappears off to Spain in pursuit of a bloke, she leaves Chantelle and her ten-year-old brother Leon without so much as a goodbye or, more importantly, a tenner to pay the electric, let along buy food.

Chantelle is unsure when Mary will be back, so first dips into her meagre savings and then tries to get a job as their money dwindles rapidly. When her mother’s drug dealer comes knocking on the door to collect the debts she owes him, Chantelle’s life gets abruptly worse.

While she’s struggling to make ends meet, Leon is doing his best to worm his way into one of the gangs on the estate and rapidly gets sucked into a frightening world of drugs, knives, fights and even guns. When he gets in too deep, the only person Chantelle can turn to is Anton, newly-released from prison and doing his best to stay straight, even if it means working as a security guard in a grotty, back-street shop. But Chantelle has been doing her best to keep Anton at arm’s length, not wanting to join the queue of girls from the estate vying for his attention, and so turning to him really is going against the grain.

There’s something hideously compelling about watching Chantelle’s life get steadily worse, and her train-wreck of a mother is the sort of character you can’t tear yourself away from. She drinks, smokes, takes drugs, and goes on a shoplifting spree to finance her upcoming wedding to sleazy Spaniard, Miguel, who she’s brought back with her. Mary thinks absolutely nothing of stealing from other people – or her daughter – to get what she wants, and seems to have little in the way of redeeming features. But it’s never possible to write Heller’s characters off as caricatures or stereotypes because they’re not – they’re all too real, every single one of them.

The dialogue is perfectly pitched, from sophisticated, superficially charming Rob, to street-talking gang-boss Big T. The storyline careers along like a nicked car, gathering pace towards what you know is going to be an uncontrolled and violent ending. But it’s never wise to think you know where Heller is going with her stories or her characters, and there are always some surprises in store.

My only quibble is that she has a somewhat shaky grasp of point of view, and it can be a bit of a strain head-hopping your way around a scene. But that’s a very minor niggle amidst some top-quality story-telling. You’ll end up rooting for Chantelle every step of the way as the odds mount against her, and when she makes mistakes, you’ll need to remind yourself that under the competent exterior is a frightened young woman doing her best in a really shitty situation. And then when you hear politicians start going on about benefit cuts, remind yourself that there are countless women like Chantelle, up and down the country, doing their best to survive against a backdrop of gangs and loan-sharks every single day.

There really is no one better than Heller at dealing with the grimy underbelly of life.