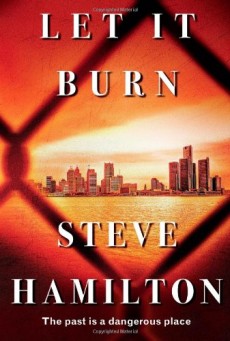 Alex McKnight, invalided out of the Detroit police and retired to Michigan’s Lakeland, is tipped off that a killer he helped convict is due for release – but McKnight is now having some doubts about the man’s guilt.

If you haven’t met Alex McKnight before, don’t worry, this is effectively a standalone and covers enough of his back history and present circumstances for the reader to identify with his character, his life and his eclectic collection of friends. He was invalided out of the Detroit police after being shot, and now lives in Paradise, a small town on Lake Superior, working occasionally as a private investigator and hiring holiday cabins. He’s hardly what you would call a sunny soul, but he’s fiercely loyal, enigmatic and a thoroughly decent bloke – a real tough-guy with a heart of gold.

McKnight is tipped off that a self-confessed killer in whose conviction he played a major part is about to be released from prison, and discovers a niggling feeling that there was something he overlooked at the time on what was to prove his final case. But why would someone admit to a brutal murder they did not commit – and how could the police have got it so wrong?

The more he thinks about it, the more questions he has – questions nobody wants to hear, and even he isn’t sure he wants to find the answers. But turning a blind eye is not his style and when he discovers a link to similar killings being probed by the FBI he becomes determined to understand what happened and put right what appears to be an awful injustice.

The action is takes place almost entirely in Detroit, once the heart of the American automobile industry, now an empty and run-down shell. The switch between times is effortlessly handled and this is a cleverly-written and captivating book. Hamilton’s ability to develop his characters, a strong sense of place, good action, McKnight’s introspection allied to some wry humour and the sheer normality of it all will grab and retain your attention throughout.

Regular fans may miss Paradise and McKnight’s quirky friends – and it’s a real shame about the ending. It’s almost as if Hamilton ran out of ideas and allowed a fine plot with great characters, great descriptive writing and some totally believable action to fizzle out in what, at its best, can only be described as a stock finish. But that aside, this tenth book in the McKnight series is thoroughly enthralling and, unlike many American police/PI stories, actually puts a believable and human face on the business of law enforcement.