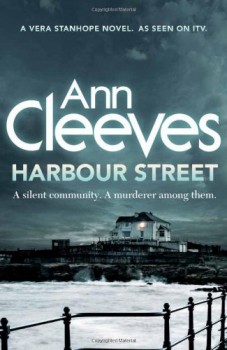 An elderly, elegant, woman is found dead on a Metro train in the north east of England. It turns out that she lived in Mardle, the next stop on the line, and that, although reserved, she is well liked in her hometown.

It is Christmas and DS Joe Ashworth is returning to Mardle on the Metro with his daughter, Jessie, having attended a performance by the Newcastle Cathedral choir in which she had taken part. The train comes to a halt one stop before Mardle and the passengers are informed that there is a problem on the line ahead and that they will have to continue their journey by a specially provided bus. Everybody gets out, except one elderly woman, who appears to have fallen asleep. When Jessie goes to wake her it turns out that she is dead.

The ITV series, Vera, will have made television viewers familiar with DI Vera Stanhope of the Northumberland and City Police. She is fat, too fond of fish and chips and cakes and a compulsive tea drinker. Those who underestimate her and wonder how such a woman could hold a high rank in the police force soon discover to their cost that she is highly intelligent and relentless in pursuit of the truth, even though she can sometimes be a little impulsive and overly confident in her own abilities.

She is almost obsessive about her work and has no compunction about insisting on the same degree of commitment from her subordinates, DS Joe Ashworth and DC Holly Lawson. This doesn’t worry Holly, who is anxious for promotion, but Joe is a family man and would prefer rather more regular hours than his boss is prepared to allow. However, in spite of this there is admiration of her on his part, whilst she regards him almost as a son. There is nothing sentimental about the attachment, however, and he is frequently the object of her caustic wit.

Ann Cleeves’s ability to create real people is evident not just in the police characters. Kate Dewar is instantly recognisable as the middle-aged woman who, although she loves her two children, is nevertheless aware that they are teenagers, with all the problems that onrushing hormones bring. She feels vaguely guilty because she no longer seems to be able to communicate meaningfully with them. Perhaps she feels slightly guilty also about the new man in her life, the thought of which affects her own hormones and leaves her sexually aroused.

The story of Margaret, the murdered woman, as far as it is known, is mysterious and we are intrigued by references to her former beauty and the intoxicating effect she had on men. This is difficult to reconcile with the reputation she has for her charitable work and her concern for someone despised by virtually everybody else. Malcolm Kerr appears to have his own mysterious past but, whatever that may be, we recognise the sadness arising from a life unfulfilled, from a love that never came to fruition. Even those people with minor parts have something about them that makes them interesting. With one possible exception, there are no characters introduced simply as possible suspects.

Although in the end this book is a whodunit, we do not find ourselves looking with suspicion at every character introduced. We become involved in the story – much of it set in the past – and eager to learn in what way that past and the people it contained can possibly have relevance to the murder that has just taken place in Mardle. Gradually the connection begins to emerge. Margaret’s ‘secret’ is eventually revealed, and, whilst it is important to an understanding of why the murder took place, it is not in itself a motive for murder, as we might have expected. The real motive is much more prosaic and all too believable.

The last few pages leading up to the identification of the murderer are compelling as the careful police work reaps its reward. Vera, however, is unable to persuade either Joe or Holly to come for a Christmas drink as a celebration. Both have other commitments and regretfully she gets into her Land Rover and sets off alone for the hills. That theme of loneliness is one that occurs again and again and it is appropriate that the story should end in this way.