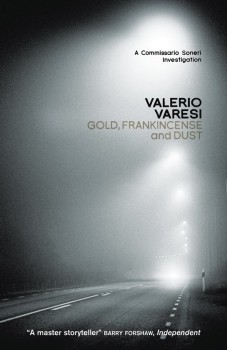 Parma is enveloped in a thick mist for several days. The badly burned body of a young woman is discovered dumped at the bottom of a motorway embankment. A complex investigation is needed before her identity can be discovered.

There is a pile-up in thick fog on a motorway on the outskirts of Palma. Subsequently the badly-burned body of a young woman is discovered dumped nearby. Being on the outskirts of a city, the locality is drab and barren with large supermarket buildings, a motorway service station, and scruffy open spaces. It is an area where those on the edge of the traditional Parma society, such as gypsies and immigrant workers, choose to locate their caravans and businesses. It is made even bleaker by the fog and the darkness and a herd of wandering bulls. It is into this area that Soneri, the commissario, and Juvara, an inspector, go at first to investigate reports of the stray cattle.

There is helpfully an author’s note at the start of the book to explain the police system in Italy. However, with the wide range of characters from both the police and the Carabinieri it is quite difficult to follow what is happening at times, particularly in the first half of the story. This may of course have been a deliberate strategy to reinforce the sense of confusion caused by the fog. It is only in the second half of the book that Soneri becomes the main character and the narrative begins to flow more freely.

The book relies heavily on the reflections of this main character, the detective, as he tries to draw conclusions from what he encounters in order to inform his own difficulties with life and love. For example: “The mistake we make is to be always engaged in a search for certainties.” It was probably forever thus, but here the psychological theories are spelled out explicitly in conversations and reflections rather than just being used to underpin the plot.

Another common feature of some modern crime fiction is a desire to address current issues. In this case the story involves the free movement of people across the European Union, and the misery often encountered by those moving to try to find a better life.

Following the story is not always easy, not helped by the occasional non-sequiturs, but nevertheless there is a real sense of the struggle between people’s traditional views and beliefs and the way in which they are having to come to terms with new ways of living on all sorts of levels, from the experienced and thoughtful detective to the younger, naive inspector, and from the older refugees and their community values, to the more adaptable youth. They are all subject to the dangers and inconsistencies of the underbelly of traditional Italian society. Gold, Frankincense and Dust is a complex novel indeed, but one which should make its readers think.